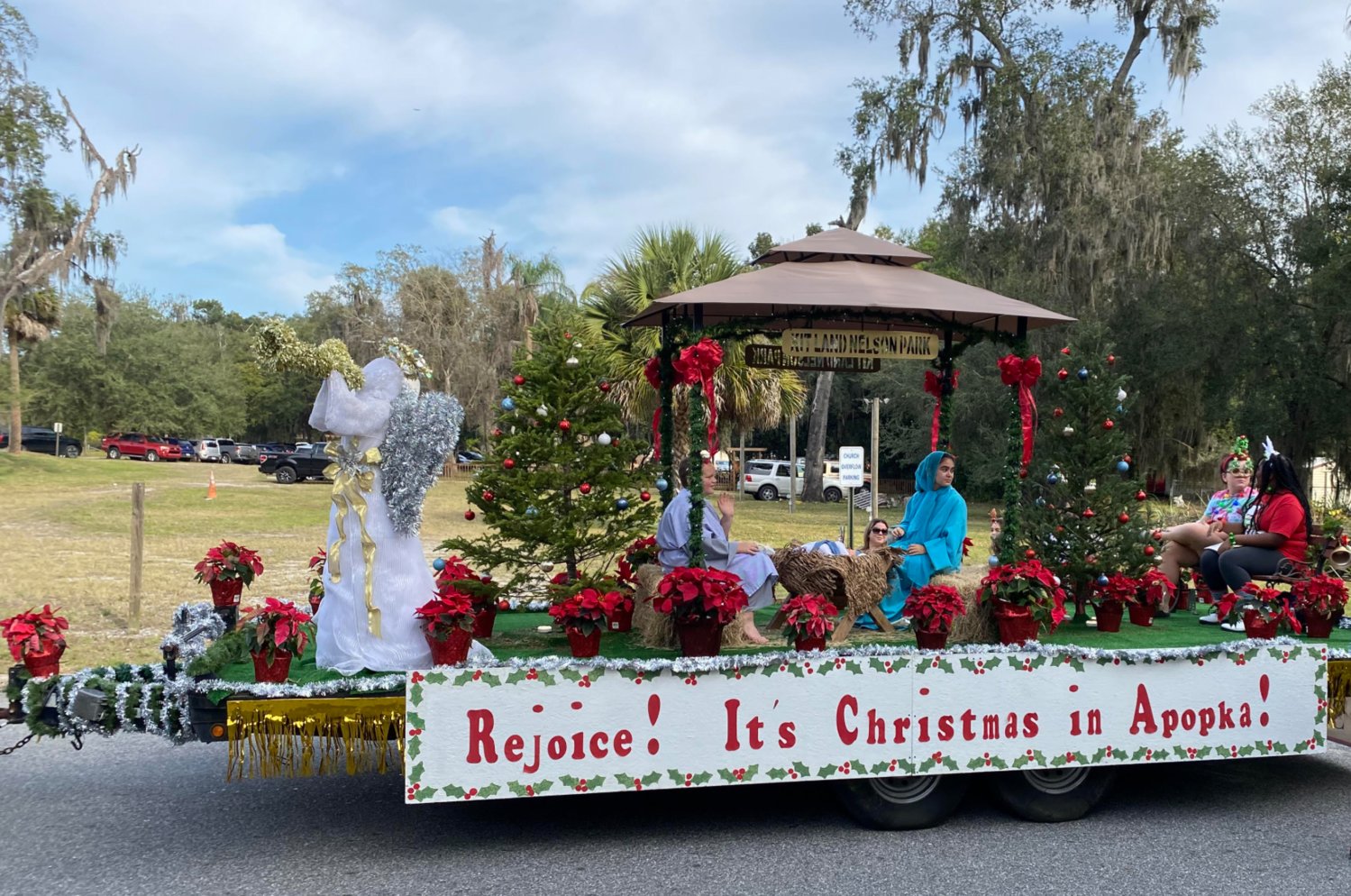 Saturday was a good day in Apopka.

It began with the resurgent Apopka Christmas Parade sponsored by the Foliage Sertoma Club. As they have in previous years, paradegoers filled both sides of Park Avenue to watch over 80 floats, trucks, vehicles, groups, and first responder vehicles take the traditional parade route to wave, throw candy at the audience, and play music.

And not just any music, but high school band music in particular.

Yes, the marching bands from Apopka, Evans, Ocoee, and Wekiva high schools returned after an absence last year due to COVID restrictions. They entertained us with their thundering brass, drums, and youthful energy, but this parade was essential for reasons beyond its entertainment value. The entire day was a return to normalcy that this community desperately needed.

Families and friends watched together with other groups side-by-side. Parents waved proudly at their children on floats and clicked photos from their phones. People walked into the parade route and danced without a care in the world.

The theme this year was Rejoice! It's Christmas in Apopka!

It's hard not to love a theme with two exclamation points and a call to action.

I also liked the 2020 theme "Health, Hope, and Unity". It made sense in 2020, but after the COVID delta variant wreaked havoc in Apopka this past summer, it applies this year too. We will never take our HEALTH for granted. But we weathered the storm this year, and even though we may never eradicate COVID, we've turned a corner.

Commissioner Kyle Becker and his family.

And Saturday was proof of that turn.

There was a sense of UNITY and joy at that parade, but can it survive through a local election cycle?

In 2020, there was a contentious national election that some people were not ready to move on from by the end of the year, so a call for unity made sense. But in Apopka, we are about to embark on a 2022 election season that could potentially drive a wedge through this community similar to the mayoral election of 2018.

So far, that has not been the case. The candidates have presented their visions for Apopka and contrasted them with their opponents respectfully, which is how a campaign should go.

But these campaigns started months ago, and elections are marathons. Both sides are jogging and setting their paces right now, but by January, there will be a sprint to the finish line mentality.

In 2022, you can expect to see Apopka streets lined with candidate signs, mailboxes filled with political mailers, and a debate that will probably be... well, a passionate debate.

I HOPE the candidates and their supporters can limit their critiques to policy issues and not resort to name-calling, personal attacks, or the dark artistry that clouded social media in 2018. I'm not asking the candidates to "stay in their lanes" when campaigning, but comparing your advantages to your opponent doesn't have to be ugly. Apopka voters deserve to see what an issue-driven election can look like and the good that can come from it.

Let's remember, Apopka SHOULD come together after this election and support the four city commissioners and mayor no matter who they are.

Okay, enough about politics. Let's call that small rant my grown-up Christmas wish for the 2022 Apopka elections. And speaking of "Grown-up Christmas Wish" - that was one of the songs played at the Apopka Amphitheater Saturday night.

As the sun descended into the western horizon and a warm afternoon gave way to a mild evening under the stars, the Orlando Philharmonic Orchestra gave Apopka a show that put an exclamation point on the day's events.

The orchestra opened the concert with a sound so crisp I thought they pre-recorded it from a studio. I'm not a music critic, but I know extraordinary talent when I hear it.

The singers that accompanied them on several familiar songs, with their booming operatic voices, only enhanced the experience.

But in the second half of the performance, the featured violinist reminded me that classical music has the power to elevate your spirit and emotions when played well. Her solo performance of Vivaldi's Winter movement of "The Four Seasons" was inspiring and brought tears to the eyes of people in the audience.

Oh, and about that audience...

Yes, they were loud and chattery at times, but also respectful, interactive, and appreciative of this incredible orchestra. I'm not sure how many were in attendance, but it's safe to say the Apopka Amphitheater was at capacity, with all the seats filled and hundreds more sitting in the grass on the hill.

There have been a lot of performances at the Amphitheater in 2021, but none more impressive than Holiday Pops.

So rejoice! It's Christmas in Apopka! And Saturday was a great day.