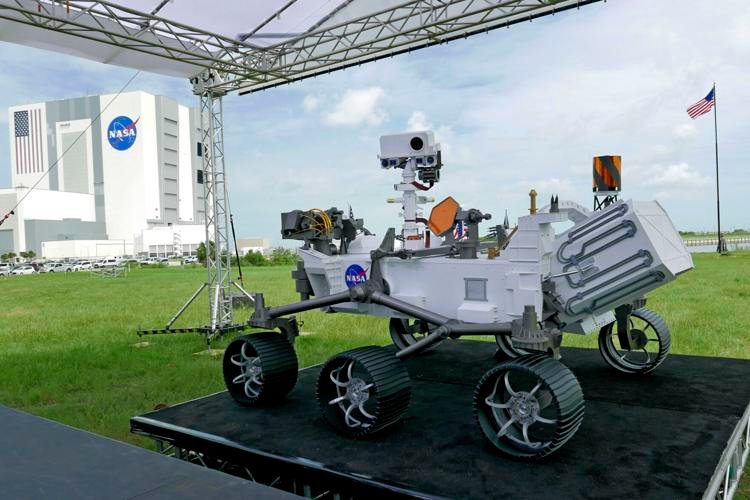 A replica of the Mars rover Perseverance is displayed outside the press site before a news conference at the Kennedy Space Center Wednesday, July 29, 2020, in Cape Canaveral, Fla. United Launch Alliance Atlas V rocket launch scheduled for tomorrow will transport the rover to Mars. John Raoux
Posted Wednesday, July 29, 2020 9:21 pm

NASA’s new Mars rover "Perseverance" is scheduled to launch from Cape Canaveral Thursday atop a United Launch Alliance Atlas V rocket and land on Mars next February to drill for soil samples that will be collected by another Florida-launched spacecraft in 2026.

The launch, which has already been scrubbed three times, is considered critical for an array of missions intertwined with NASA’s goal to send astronauts to the moon by 2024 and, eventually, to Mars.

NASA has until Aug. 11 to launch "Perseverance" to augment its AeroSCuriosity rover, which has been exploring Mars’ Gale Crater since 2011. If it can’t do so by then, the next launch window won’t unfold until 2022.

While "Perseverance" was built in NASA’s Jet Propulsion Laboratory in California, much of the other launch assembly was fabricated in Florida, where aerospace pioneers such as the Aerospace Industry Association, Blue Origin, Boeing, SpaceX and ULA have established manufacturing and operating sites.

While attending May’s launch of NASA astronauts aboard a privately owned spaceship built by SpaceX in Florida – the first launch of Americans into space from U.S. soil in a decade and the first-ever aboard a privately-owned spaceship – Florida Gov. Rick DeSantis said the Sunshine State will play a pivotal role in man’s immediate quest to go to Mars and long-range aspirations to explore outer space.

“The next stop is to the moon again, and then the stop after that is Mars,” he said.

Florida’s two U.S. senators, Republicans Marco Rubio and Rick Scott, and all 27 members of the state’s Congressional delegation this week dispatched a letter to U.S. Air Force Assistant Secretary citing the advantages of locating the new command in the Sunshine State.

Florida has a long history in aerospace industry after serving as the proving grounds for the nation’s missile programs, beginning with America’s first launch of Bumper 8 in 1950 and the first manned missions into space in 1961, the letter notes.

Five of the nation’s 14 commercial space launchpads are in Florida and managed by Space Florida, a public-private state agency created by the Legislature in 2006.

“Every American manned mission to space, including SpaceX’s recent successful Crew Dragon launch, began its voyage on Florida soil. Apollo, the Space Shuttle, and the Mars Rovers all launched from Florida,” the letter states.

Jacksonville, Tampa, Pensacola, Orange and Miami-Dade counties “would make an excellent choice for the home of SPACECOM,” the letter suggests.

Florida also knows how to provide for military installations with three combatant commands, 20 active duty installations, and the chosen home of 1.5 million veterans “as the most military friendly state in the nation,” the letter said.

A wide range of state interests continue lobbying to locate U.S. Space Command in Florida despite a preliminary April recommendation by the U.S. Air Force that named six potential sites, including four in Colorado, to serve as headquarters.

According to some estimates, U.S. Space Command would eventually bring 1,200 high-paying jobs and draw an estimated $2 billion in direct Pentagon investment, “seed” money that could generate related employment for thousands and contribute as much as $5 billion in associated benefits, to the state and local economy where it is placed.