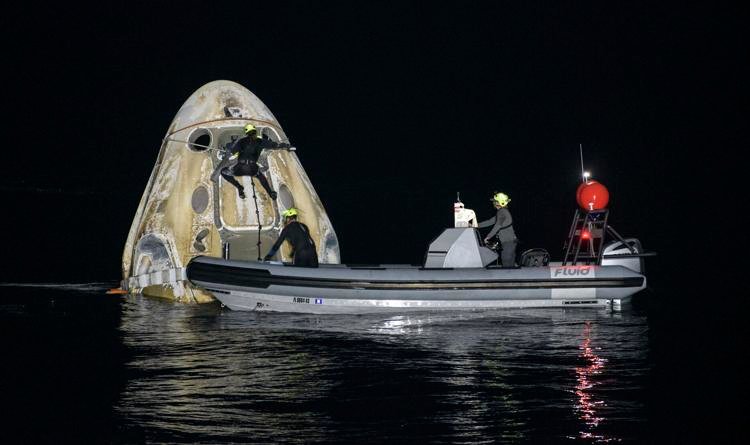 Support teams work around the SpaceX Crew Dragon Resilience spacecraft shortly after it landed with NASA astronauts Mike Hopkins, Shannon Walker, and Victor Glover, and Japan Aerospace Exploration Agency (JAXA) astronaut Soichi Noguchi aboard in the Gulf of Mexico off the coast of Panama City, Florida, Sunday, May 2, 2021. NASA's SpaceX Crew-1 mission was the first crew rotation flight of the SpaceX Crew Dragon spacecraft and Falcon 9 rocket with astronauts to the International Space Station as part of the agency's Commercial Crew Program. Bill Ingalls/NASA via AP
Posted Monday, May 10, 2021 7:54 pm

Under the new law, anyone who refuses to surrender an item from a space ship could be charged with a first-degree misdemeanor, which carries a penalty of up to one year in jail or a $1,000 fine

The world watched over the weekend as a failing Chinese Long March 5B space rocket re-entered Earth’s orbit with little control over where it would crash.

Ultimately, most of the rocket disintegrated in the atmosphere before spreading debris across the Indian Ocean west of the Maldives.

"Spacefaring nations must minimize the risks to people and property on Earth of re-entries of space objects and maximize transparency regarding those operations," said Nelson, a former astronaut, Sunday. "China is failing to meet responsible standards regarding their space debris.”

Under a Florida law that goes into effect July 1, any parts that detach from a vehicle operated by a “spaceflight entity” remain under its ownership upon re-entry, "regardless of physical condition or location.”

HB 221 passed the House April 15 in a 115-1 vote and the Senate April 26 in a 38-0 tally and requires any items found from a space vehicle be reported to local law enforcement agencies, who must notify “spaceflight entities” of the recovery or location of a lost part.

Under the new law, anyone who refuses to surrender an item from a space ship could be charged with a first-degree misdemeanor, which carries a penalty of up to one year in jail or a $1,000 fine.

Supporters maintain it is essential that aerospace companies be allowed to recover their equipment if Florida’s aerospace industry is to sustain its recovery from the 2011 cancelation of NASA’s space shuttle program.

According to the National Aeronautics & Space Administration (NASA), more than 33,000 of those employees were working on $5.9 billion worth of contracts for the federal agency in 2019, including 10,870 working on contracts for nits ‘Moon To Mars’ mission.

SpaceX, Blue Origin, Boeing, Relativity Space, Firefly Aerospace, OneWeb Satellites and Lockheed Martin are among corporations setting up on the Space Coast to compete in what economists project will be a multi-trillion dollar industry in a decade

Sen. Tom Wright, R-Port Orange, who sponsored the Senate version of the bill, cited how the recovery of two astronauts in Elon Musk’s SpaceX Crew Dragon capsule when it returned from its historic August flight — the first time astronauts rode aboard a privately-built, re-usable commercial space ship — was hampered by private boaters looking for souvenirs.

“Some of the parts, when we come back in for descent of the capsule, they have to jettison a door in order for the parachutes to deploy and it’s well-marked," Wright told the Senate Military & Veterans Affairs, Space and Domestic Security Committee in March. "And what’s happened is they’ve been picked up by boaters that have unfortunately gone out in the area of recovery and really caused an issue and then they’ve attempted to sell that item on eBay.”