Just How Will The World End? 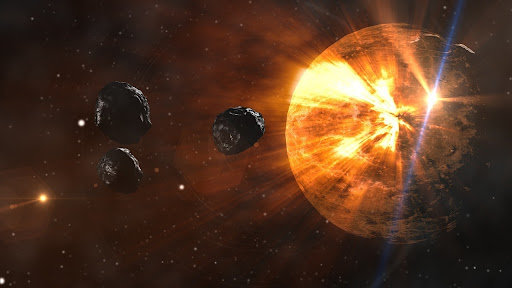 There have been many prophecies over the years as to how the world will end. According to some prophecies, the world should have ended already (most famously, The Mayan Calendar claimed that the world would end in 2012). But just what is the most likely way in which the world will be destroyed?

Will humans destroy the earth?

There are various ways in which the human race may destroy itself and the earth along with it. Catastrophic climate change is a likely scenario if we do not find a way to clean up our act - if the Earth heats up to 4 degrees celsius, it could put the human race in serious danger as sea levels will rise dramatically and most agriculture will not be able to be sustained. Another possibility is a nuclear war, which could result in a nuclear winter capable of wiping out most of humanity. Although either situation could kill off most of the population, human beings are very tenacious, and it is likely there would still be pockets of civilization. Most flora and fauna would be wiped out, but some would still persist.

Will there be a rapture?

There are various religious interpretations of the apocalypse. One of the most commonly believed theories is the Rapture - a belief that there will be an end-of-world event in which both living and dead believers will ascend to heaven, while non-believers will be left behind to deal with the tribulations. When will the Rapture happen? Although there have been many predictions (including failed predictions such as 1988 and 2011), no single date has been agreed on. There are also many disagreements as to exactly what the Rapture’s end-of-world event will look like.

Will a rogue asteroid hit the earth?

We already know that dinosaurs were wiped out by an asteroid. Could humans suffer the same fate? The asteroid that wiped out the dinosaurs was between 10 and 15 kilometers wide. Scientists have predicted the chance of being hit by another asteroid of this size at 0.000001% - making it very slim. We will get hit by other large asteroids, but they most likely won’t destroy the Earth. As planetary defense improves, we’ll also hopefully be able to spot such asteroids years in advance before they hit in order to plan their deflection.

Will there be a supervolcano?

Many people are unaware that there was an extinction that took place before the one that killed the dinosaurs. The Permian extinction is believed to have wiped out 90% of the Earth’s species and was caused by the eruption of a supervolcano. The eruption of another supervolcano is certain to happen again. Could the likes of Yellowstone wipe out the world? Possibly, but given that the world was able to recover once, it will likely recover again.

What is the most likely end-of-world scenario?

Eventually the world will be destroyed by the sun. At least this seems to be a widely-held belief, and for many, believe it is a certainty. The sun will turn into a red giant and swallow up the Earth, scorching all life on it. This is due to happen in 7.59 billion years (the earth is currently only 4.54 billion years old, so we’ve still got some way to go). The human race is likely to have wiped itself out by then or left Earth for another planet. In any case, it’s probably not worth worrying about.