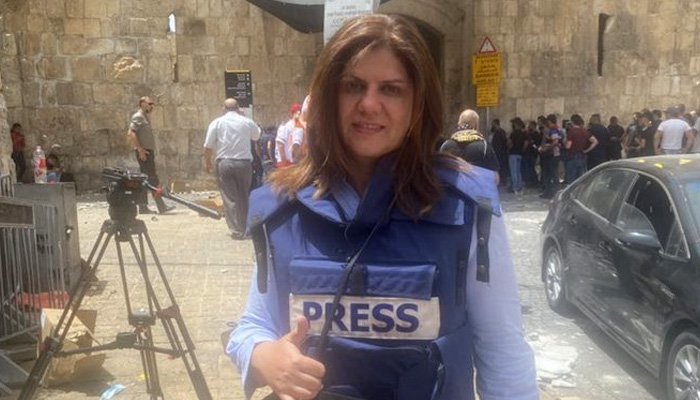 Shireen Abu Akleh, a Palestinian-American correspondent, was fatally shot in the head on May 11th while covering an Israeli army operation in the West Bank town of Jenin.
Photo from Khuloud Assaf attari
Posted Thursday, May 12, 2022 11:23 pm
By Reggie Connell, Managing Editor

It's been a deadly year for journalists.

In just the first five months of 2022, 17 of them have died, including seven in Ukraine since the Russian invasion. According to the Committee to Protect Journalists website, there have been 1,443 killed since 1992.

The most recent was Shireen Abu Akleh of Al-Jazeera.

Abu Akleh, a Palestinian-American correspondent, was fatally shot in the head on May 11th while covering an Israeli army operation in the West Bank town of Jenin, according to a report by Al-Jazeera, a video of the aftermath of the shooting posted on Twitter by Al-Jazeera, and multiple news reports.

One of Abu Akleh's former colleagues, Mohammad Hawwash, who knew her for more than 25 years, said she was a "real journalist".

"Shereen was a professional and unbiased journalist who conveyed the reality and events as they are," Hawwash, 70, told Al Jazeera.

And the most common subjects covered by these journalists that lost their lives?

These reporters and correspondents shined the spotlight on the most egregious abuses in our world, and they paid the ultimate price.

If you follow The Apopka Voice, you may know that I occasionally publish articles about journalists who died reporting the news worldwide. I know these heroic reporters are not hyper-local to Apopka, but I want the readers to understand the lengths journalists go to tell the story of their community, nation, and world.

When a president calls the media an enemy of the state, and phrases like post-truth, fake news, and alternative facts become part of the American political language, there is a misunderstanding about the role of journalism.

That misunderstanding was brought into local social media the other day when I read this meme:

"If you repeat a lie often enough, it becomes... journalism."

The meme shows a child writing that statement, and that is bad enough on its own. But adding even more salt to the wound - it was posted by a pastor.

To be clear, this was not a local pastor, but someone from another state. The story was re-posted on a local Facebook page in January. It was months later that Abu Akleh was shot, but still, it touched a nerve when I  saw it a couple days ago.

I am not a war-time journalist, and I do not fear for my life reporting the news in Apopka. I respect everyone I write about, and I have been treated with respect. I do not speak for all journalists, but I can say that I have NEVER written a critical word about anyone without significant hesitation beforehand and without first giving that person an opportunity to tell their side of the story.

From our country’s beginning, the right of the press to challenge the government, root out corruption,  speak and write freely has been central to our democracy. Through accurate news gathering and reporting, journalists keep the public informed. Dedicated journalists in local communities, across the country, and globally are putting themselves in harm’s way to cover the news; to shine a light on the many facets of the challenges we face. They are working to hold elected officials and leaders accountable, find the answers, and seek justice.

Certainly, there are reporters and pastors who deserve criticism, but the vast majority of both are good people doing important work in our community and across the world. If you or anyone has an issue with any specific journalist or story, feel free to make your case.

That's all a part of the first amendment that is an invaluable right in the United States.

What is NOT okay is to take the entire profession of journalism and compare it to a lie told over and over. By taking on the entire idea of journalism, you risk eroding one of the foundations that makes America the great country that it is.

Unfortunately, it's not the only meme I've seen attacking journalism or any number of other institutions. It's simply how social media sometimes operates.

I am, however, surprised that a pastor would resort to a simplistic, sarcastic meme to make a cheap point underneath an article on Facebook. A pastor who no doubt is appalled when Christianity is attacked and painted with a broad brush because of the actions of one or just a few Christians.

That's all. My rant is over. I'm not calling for any action to be taken, except maybe give a little more thought to your comment on social media before criticizing the institution of journalism.

In honor of the brave news people in war zones, battlefields, and occupied territories who have died reporting the news, and in honor of Shireen Abu Akleh, I could not let those words go unanswered.