Iconic pastor comes to Apopka on a mission to eradicate homelessness 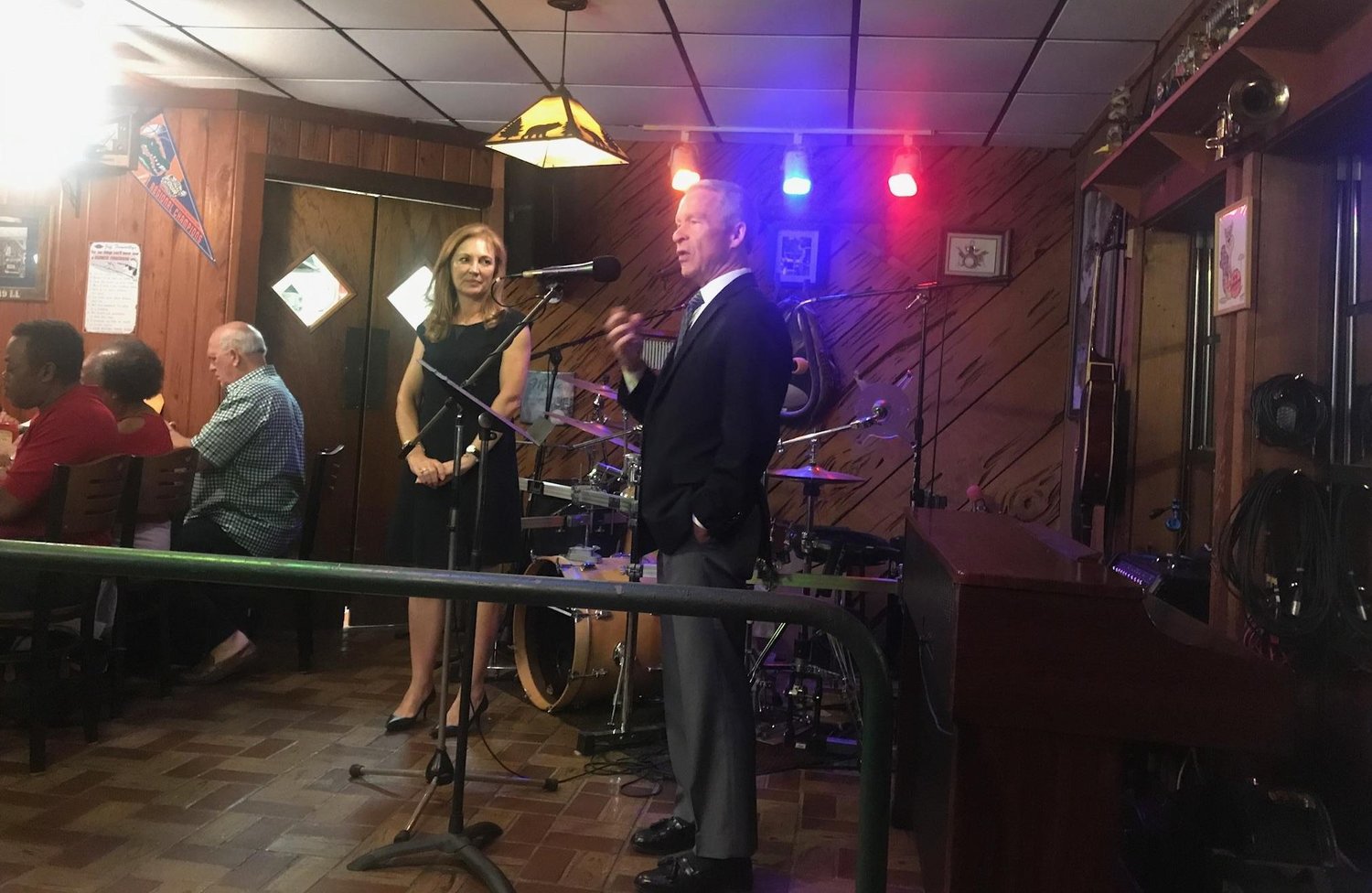 The VOICE of compassion: Hunter speaks to area pastors

By Reggie Connell/ Managing Editor of The Apopka Voice

Hurricane Irma slammed into Apopka last week with unexpected fury and jarred the community to its core. Streets flooded, trees fell, and the vast majority of residents lost power at their homes, but when the wind and rain subsided, Apopka came together and began the process of recovery from the devastation that Irma inflicted. Neighborhoods went house-to-house clearing fallen trees, clearing their lawns, and rehabbing their damaged homes. Churches partnered with elected officials and went into the communities with food and hot meals. Restaurants and businesses contributed to the effort as well. Residents with no electricity at their own homes went into the community and helped their fellow man.

It was a shining moment in Apopka history.

Our community will recover from Hurricane Irma, and it is my sincere hope that we will maintain this energy, charity, and unity in taking on an issue that may not be as headline-grabbing as a Category 5 hurricane, but that wrecks the lives of so many families and individuals in Apopka, Central Florida, and across the nation - homelessness.

About two weeks ago; just before Apopka went into full-steam-ahead preparations for Hurricane Irma, there was a gathering at the Catfish Place Restaurant sponsored by Orange County Commissioner Bryan Nelson, and the Apopka Christian Ministerial Alliance. Dr. Joel Hunter was the featured speaker.

You may have heard of Hunter. He served as senior pastor of Northland Church in Longwood for 32 years. He gained national fame when he delivered a prayer at the 2008 Democratic National Convention in Denver and joined a religious advisory council to President Barack Obama. In 2017 he retired from Northland, and transitioned from that role on a mission that he describes on his website as “going from my best interpretation of what the Bible says, to my best imitation of how Jesus lived.”

'Truly I tell you, whatever you did for one of the least of these brothers and sisters of mine, you did for me.'

"In the past, we asked the homeless to change their ways before they moved to a home, but smart people saw it was not working," said Shelley Lauten CEO of the Central Florida Commission on Homelessness (CFCH). "If you give them a home, they aren't homeless. If you're in a home, you are more stable."

According to its website, the CFCH is committed to eradicating homelessness in Central Florida. Through research, strategic policy development, collaborative leadership engagement, and high-impact grassroots campaigns, the Commission has made significant headway in informing and inspiring our community to act on the issues facing homeless Veterans, families, youth, and other homeless individuals.

On a fundamental level, the Commission coordinates non-profits, faith-based institutions, philanthropic initiatives, businesses, and other charitable and community organizations to positively impact homelessness in the Orange, Osceola, and Seminole tri-county region.

In 2014, the Commission released a groundbreaking report entitled The Cost of Long-Term Homelessness in Central Florida, calculating the true expense for each chronically homeless individuals in the community to be roughly $31,000 a year. In contrast, the research conducted by a top national homeless expert concludes that “providing the chronically homeless with permanent housing and case managers to supervise them would run about $10,000 per person per year” (Orlando Sentinel, 5-21-2014). These findings solidified the Commission’s goal of battling all types of homelessness (with a new emphasis on chronic homelessness) through the creation of permanent housing solutions that include healthcare and social services.

The idea of taking on chronic homelessness was of particular interest to Nelson.

“I’m really excited about this, especially for homeless families," he said. "I don’t think we can begin to understand the toll it takes on a person's self-esteem to be homeless, and I believe this program can ultimately change the course of their lives. Churches can do things that government simply can’t. We eliminated chronic homelessness among veterans in Orange County. Now our goal is to reduce chronic homelessness among everyone. And involving churches in Apopka and throughout Central Florida is an effective way to take on this issue."

Dawn Haynes is the CEO of the Community Resource Network (CRN). Her organization is attempting to coordinate churches in Central Florida. She also spoke at the event, made up primarily of Apopka area pastors, which is a group CRN would like to partner with to help the homeless.

"We want to empower people who have a heart for homelessness," she said. "Through this initiative, we can take the families from one end of the spectrum to the other... From homelessness to sustainability. You don't have to empower the system; the system empowers you and your congregation."

According to its website, the CRN is a network of collaboration among churches which support the region’s response to housing instability, complementing the work of local governments and nonprofit agencies who serve those living without a home. Alongside organizations like the CFCH and Homeless Services Network, the faith community can play a vital role.

"Every church, large and small, has something to offer in this effort," Haynes said. "Meeting needs with tangible resources like food or clothing or going deeper to walk alongside in a much more intentional manner. With the faith community’s support emotional, spiritual and relational needs are addressed. Together we can multiply our efforts by identifying and cataloging the unique resources each congregation has within the network. Through the network we can work together to create holistic care plans for families, emphasizing the church’s passion for restoration through meeting concrete needs, relationship building, and community connection. Perhaps the way churches can best help is not through the stuff we give, but through the hope we offer. Prayer, hope and encouragement are extended in the context of relationship and community."

A nation's greatness is measured by how it treats its weakest members."

Darrell Morgan, the president of the Apopka Christian Ministerial Alliance sees homelessness consistently and acknowledges its growth in the Apopka community. He for one is ready to respond.

"The families and individuals are coming in all the time looking for help. It's getting bigger. We have to do something. So, we're either going to do it alone... or we do it together."

"I bet I get 10 calls a week," she said. "'I'm a single mom. I don't qualify for any programs, but I'm kicked out of my house and I'm living in my car.' Those calls are heartbreaking."

Lauten points out that it goes beyond just being homeless. There are four pillars to stability:

"The expense for families goes up when you take all of these into account," Lauten said. "But you have to surround the families with services. Institutional care is important, but it has to be relational. We want to have a relationship with the family. Unless you know them, you can't help them break the cycle. We have to walk alongside these families."

According to Lauten, 1.8 million people in Central Florida (46%) do not have access to $400 to cover an emergency, which means the homelessness issue could potentially strike half the population of Central Florida if circumstances changed even slightly... like a hurricane.

"We need to eradicate chronic homelessness," said Lauten. "We need to make it rare, brief and one-time."

How to get involved in eradicating chronic homelessness in the Apopka area:

There were several Apopka area pastors and representatives at the meeting, but certainly, not every church was represented. If you have a passion for helping the homeless and attend a church, approach your pastor or ministry staff and let them know about the CFCH or CFN.

If you do not attend a church, but would like to get involved, you may contact the CFN directly.

For details on the CFN, go here.

For details on the CFCH, go here.