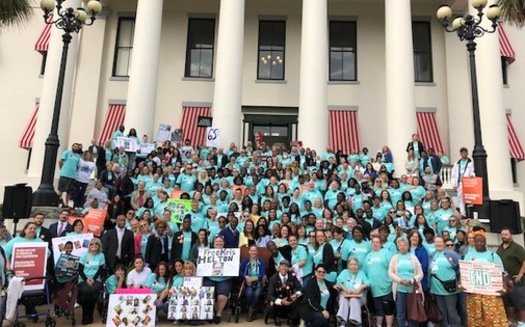 TALLAHASSEE, Fla. - Civil-rights advocates and families of people serving time in Florida prisons are rallying support for a package of prison-reform bills, including some that could help trim their loved ones' time behind bars.

Kim Lawrence says her daughter was 15 when she was sentenced to prison for a home invasion in which no one was injured - but another teen had a gun. She's currently serving 10 years, with 10 years probation.

Lawrence wants to see the Legislature passed Senate Bill 1308, which would re-sentence or release young adult offenders who qualify based on the offense. Lawrence says her daughter is 19 years old today.

"So, she'll come out at 24 years old with no work experience, no driver's license," says Lawrence. "I worry about how she'll get hired. She did just finish her law clerk program in there."

The bill is sponsored by Sen. Jeff Brandes - R-Pinellas County - which gives it a good chance of passage and may indicate overall support for criminal-justice reform in the Republican-controlled Legislature. But there is resistance from groups including the Florida Sheriff's Association.

Judy Thompson, CEO with the nonprofit group Forgotten Majority, says she'd like to see the support of House Bill 189. It would allow people to reduce their time in prison through credits for good behavior, to serve 65% of their sentence - instead of the current 85%, which Thompson says is a restriction from the 1960s.

"Through the 'Get Tough on Crime' era, they upped it to 85%," says Thompson, "along with three strikes, PRR (Prison Releasee Reoffender), habitual offenders, mandatory minimums and anything else that would keep specifically African Americans and minorities locked in these prisons in great numbers."

She says in the current system, once a person has earned rehabilitation credits to reduce their time served to 85% of their sentence, there's little incentive to continue good behavior. Several bills related to criminal-justice reform are working their way through the legislative process.