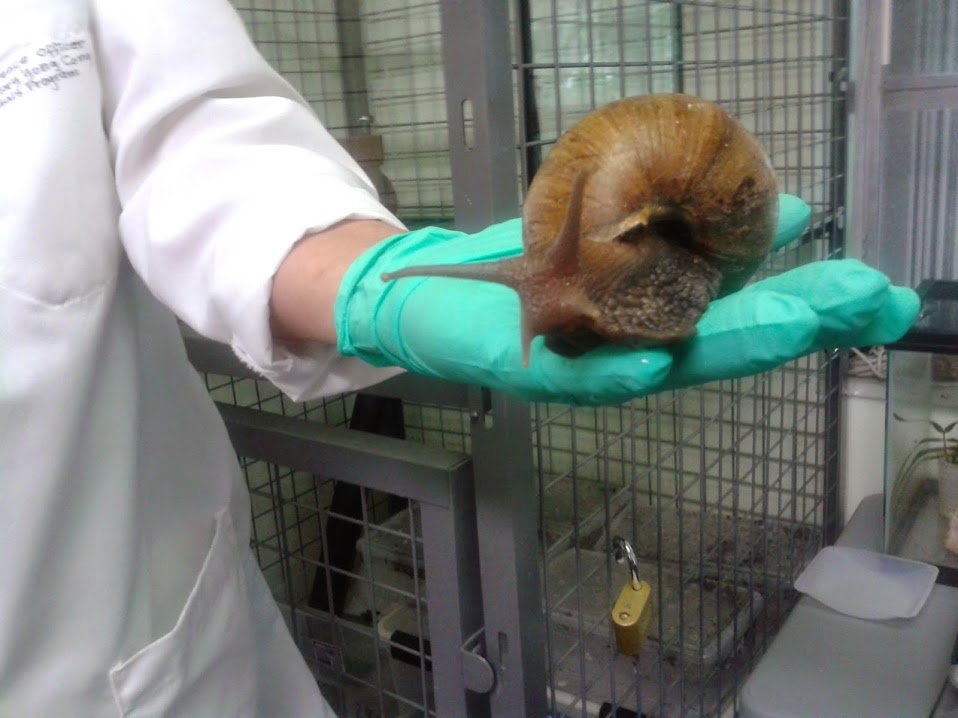 Are there lessons from the snails for dealing with other invasive species?

We Floridians have so much to be proud of. Our beaches often rank at or near the top in the world. Our state park system has won national awards four times. We’re definitely No. 1 in producing weird news every single day.

There’s one thing where I kind of wish we were not leading the other states, though — the number of invasive species. Florida has more of them than anywhere else in the country, thanks to our laissez faire laws and our tropical climate.

You’ve heard about the Burmese pythons, of course, and the iguanas that pop up in people’s toilets or fall from the trees when there’s a cold snap. But there are plenty more — walking catfish, Asian swamp eels, lionfish, Argentine tegus, Nile monitors and so on.

Every week seems to bring some new intruder trying to muscle in on the native wildlife of our ecosystems. So, when I saw news last week that Florida had actually managed to eradicate an invasive species, I nearly fell off my chair.

No, it’s not the Burmese pythons that Gov. Ron DeSantis has sworn to wipe off the face of the Everglades. It’s the Giant African Land Snail, or GALS for short, that the state agriculture department has been battling for years because the snails eat 500 different types of fruits and vegetables, not to mention the stucco off the side of your house.

“This truly is an exciting day for our state and for our country,” said state Commissioner of Agriculture Commissioner and Consumer Services (and gubernatorial candidate) Nikki Fried during the press conference announcing the eradication. “It sure is nice to have good news for once to share in the state of Florida when it comes to eradication of giant snails.”

The Giant African Land Snail has been one of the most … oh, let’s say “intriguing” invasives in our state. Wiping out the GALS took more than a decade, $24 million in state and federal funding, and the deaths of more than 168,538 snails that were collected from 32 core population areas around Miami-Dade and Broward counties.

“The dogs were really important,” explained Trevor Smith, director of the division of plant industry.

I picture the dogs going back to the kennel at the end of the day and listening to the other dogs bragging about sniffing out some drugs or bombs. Then they have to admit they spent the day sniffing out snail mucus and then shrug and add, “It’s a living.”

You could tell Commissioner Fried felt downright giddy at beating Gov. DeSantis at something, in this case eradicating an invasive species. At one point she blurted out that she’d been agriculture commissioner for three years and was only just now learning that her department had snail-sniffing dogs.

What makes this even sweeter is that it’s the second time the agriculture department has beaten the GALS.

I wondered, though, whether the successful eradication of giant snails held any lessons we can apply to all those other invaders.

‘Your dress is slowly undulating’

Back in 2014, I drove over to Miami for a look at a couple of live Giant African Land Snails. They were, in a word, creepy.

A scientist working for the state agriculture department let me into the area where the snails were kept in cage, under lock and key. No chance of accidental release, he explained. No opportunity for a slow-speed escape, either, he said.

He took out the largest one, which filled his gloved hand, and held it up for me to examine. It looked big and gray and alien as its little eye stalks pulsed in and out.

Yet Smith told me that people in Europe talk about their “puppy dog looks” and keep them as pets.

“They literally will dress them up for Christmas and put little Santa hats on them,” he said. “They even paint their shells.”

Studying the collectors’ blogs and websites taught the department a lot about the snails’ biology and habits, Smith explained. Unlike Florida, people in Europe aren’t worried about one getting loose. It won’t get far before the first cold snap finishes it off.

As weird as all that sounds, it’s no weirder than the way they got here in the first place.

The GALS first showed up as an invasive pest in Hawaii in the 1930s, brought in to dress up gardens. People in Hawaii haven’t figured out how to get rid of them. Thirty years later, in 1966, a boy who visited Hawaii with his family saw a few in the wild there and stuck them in his pocket for the flight home to Florida.

When he arrived, his grandmother saw the snails in the house and put them out in the garden. From there, they spread out. It’s easy for hermaphrodites who lay 1,000 eggs at a time and can hibernate underground during droughts.

Eventually Florida collected 17,000 of them, wiping them out in seven years at a cost of $1 million.

The second time around took longer, and more money. And it was weirder.

In 2010, the Miami Herald and South Florida Sun-Sentinel carried stories about how state and federal authorities “are investigating a Hialeah man who allegedly smuggled illegal giant African snails into Florida and convinced his followers to drink their juices as part of a religious healing ritual.”

Of course, it had the opposite effect, which is what sent everyone to the E.R., thus tipping off the authorities.

The story said one woman, known as the “Godmother,” smuggled in snails under her dresses on flights to Miami. I like to picture her sitting in her airline seat, giant snails stuffed in her undergarments, and meanwhile the guy in the seat next to her says, “Ma’am, did you know your dress is slowly undulating back and forth?”

No one was ever charged with sneaking in the big snails. When I asked Smith about the religious cult, the answers turned equivocal. Maybe the cult smuggled the snails in, I am told, or maybe they came in the mail. (Snail mail, of course!)

“The mail — FedEx, Amazon, and so forth — has become the real pathway for a lot of pests that are kept as pets,” Smith told me.

That’s why some, but not all, of the giant snails in labs will be kept alive — so the dogs don’t forget the scent as they continue searching for mailed-in live snails, Smith explained.

But how did the dogs (and to a lesser extent, the people) stop the snails — and how can we transfer that knowledge to capturing more pythons, iguanas, etc.?

The key, Smith said, is jumping on the problem early. By virtue of its earlier experience with the snails, Florida agriculture officials knew immediately that they had to leap on the snail issue again as soon as it was reported, he said.

They also had to spend whatever it took to stop the snails — $20 million from state funds and another $4 million from the federal agricultural agency, he said.

He didn’t say this, but I know from talking to the folks at Everglades National Park that park officials’ first report of a runaway Burmese python was an 11-footer that turned up near the park in 1979. It had been run over, which is why it was no longer trying to hide from humans. No telling how long it had been slithering around in the jungle before then.

They didn’t take the report seriously then, nor did they bother to look for the pythons. Same thing with iguanas, first reported in Florida in the 1960s.

Now, of course, two state agencies employ some 50 professional hunters to go out at night and search the levees for the big snakes, which is the most efficient way to hunt down such masters of hide and seek. And homeowners are advised to hire professional trappers to get iguanas, Nile monitors, etc.

In other words, they’re not even spending a full $1 million a year, much less 24 of them.

Saving ag, not the Everglades

A woman I know down in South Florida is a professional python hunter — and, years ago, she hunted giant African land snails, too.

Anne Gorden-Vega’s Linkedin page mentions only her experience as a ceramics artist and teacher, not her less artistic, more brutal pursuits of invasive species.

“I was fresh out of high school, just 18, when I was looking for the snails,” she told me this week.

The one thing she said both hunts had in common was diligence.

For the Giant African Land Snails, that meant hours spent walking along poking a stick through thick landscaping looking for GALS that needed to go. For the pythons, that means spending hours driving up and down levee roads searching for snakes that she can capture.

Then, too, there was the matter of public participation.

Smith said the ag department spent money on Halloween-style ads, both on TV and before local movies were shown. The ads showed someone being frightened by the GALS and urging people to call in with tips. Call in they certainly did, he said.

There are no such ads for the pythons, iguanas, or other invasives.

Here’s what I think is different: The GALS get taken out by professionals hired by the state and feds because they threaten the Florida agricultural industry, which is worth more than $7 billion.

The pythons are the target of pros too, but not any advertising that gets the public involved, because they’re attacking the Everglades, which lacks any industry lobbying for it. And don’t get me started on iguanas, Nile monitors, etc., which threaten our ecosystem but not some big, powerful industry.

If you accidentally turned loose some big, weird-looking creature, and you’re worried it will join all those other invasives in making itself at home in our tropical climate, well, that’s a possibility — unless it also threatens a major industry. Then, and only then, should you expect the state and feds to work together on mopping up every single one of those critters.

However, if it only bothers a state or national park, well, then it’s here for good. The state and feds might at some point work together to catch ’em all like Pokémon.

But you best believe the government will move at — dare I say it? — a snail’s pace.