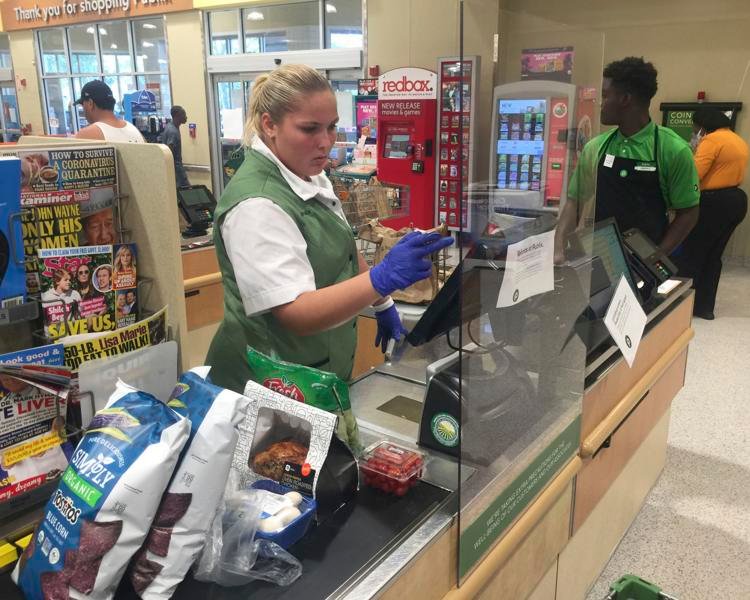 Publix supermarket has installed protective shields at its checkout registers to combat the spread of COVID-19, as seen in this Coconut Creek, Fla., store Wednesday, April 1, 2020. mpi04/MediaPunch/IPX via AP
Posted Thursday, April 2, 2020 5:52 pm

Gov. Ron DeSantis’ statewide stay-at-home order goes into effect early Friday, meaning only those engaged in essential activities or employed in essential occupations should venture out into public.

The list of activities and jobs deemed “essential” in the order is expansive and evolving.

Construction is regarded as an essential occupation under the order, something DeSantis noted Wednesday in introducing a $2.1 billion initiative to accelerate highway projects while commerce and road traffic are slow this month.

“The good thing about the construction stuff, they’re going to be outside,” he said. “As long as they’re not on top of each other, I think that they’ll be good.”

Among those construction projects:

Under the order, activities such as golfing also can continue – unless the statewide decree is augmented by local ordinances prohibiting golfing.

Clarifying that golfing is permitted was a matter of consternation in some communities, most notably The Villages in Sumter County.

DeSantis’ order allows “participating in recreational activities” and lists walking, biking, hiking, fishing, hunting, running or swimming as examples, but does not mention golf, prompting one resident to tell The Associated Press, “This is The Villages. There would be a riot if they stopped golf.”

Sumter County Administrator Bradley Arnold on Wednesday assured locals they could continue to hit the links – while practicing social distancing. The governor’s order “is not an exhaustive list of what is allowed but provides examples of those activities that would be consistent with social distancing as part of essential recreational activities,” he said in an email.

Farmworkers are exempt with farming and food processing deemed “critical infrastructure” in sustaining the supply chain.

It might be difficult for some employees in some areas to get to work, however, so Florida farmworkers and suppliers are getting permission slips from employers to ensure they get into the fields.

Under DeSantis’ order, “a social gathering in a public space is not an essential activity,” which would seem to mean church gatherings. But the order also specifically lists religious services as an “essential activity.”

That contradiction could be exploited by a Brandon megachurch pastor who defied Hillsborough County’s local stay-at-home order to stage Sunday services attended by 300 to 500 worshippers.

Pastor Rodney Howard-Browne turned himself into law enforcement in Tampa on Wednesday and was released on bond after Hillsborough County Sheriff Chad Chronister and State's Attorney Andrew Warren on Tuesday issued warrants for his arrest for violating the local ordinance.

State, county and local officials are reviewing options should Howard-Browne call for church services this weekend.