Florida panthers are popular on license plates – but the cats themselves, not so much 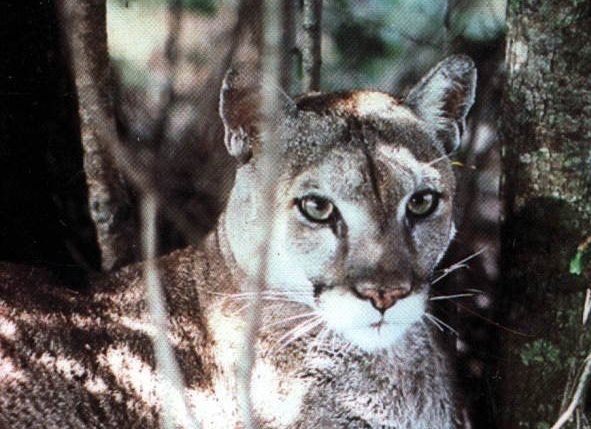 Have you ever seen a Florida panther? They’re sleek and secretive apex predators who slip around in the twilight and full dark seeking deer and hogs to eat.

They tend to avoid humans at all times – in part because we seldom do them anything but harm. This is why there are waaaay more cars in Florida with “Protect the Panther” license plates (41,000 as of 2020) than there are actual panthers.

Now is not a great time to be a Florida panther.

Our official state animal is facing a trio of serious threats that could wipe them out – threats from sprawling development, oil drilling in a national preserve, and even the Florida Department of Transportation.

“You’ve heard of death by a thousand cuts,” Amber Crooks of the Conservancy of Southwest Florida told me this week. “These are all major gashes.”

Don’t get me wrong – it’s far from the worst time ever for panthers. That would have been around 1995 when there were 30 or fewer panthers left and they all suffered from genetic defects from inbreeding.

That we still have panthers is largely due to desperate state officials dispatching a rugged wildlife tracker named Roy McBride to Texas. His job: bring back eight healthy female cougars that could breed with the remaining male panthers.

Five of the eight female cougars McBride flew to Florida succeeded in giving birth to defect-free kittens. As a result, we now have roughly 200 panthers prowling around what’s left of our wilderness. That means there are more actual panthers than Florida Panthers hockey players, which is a good thing.

I met McBride in 2009. Over lunch, I asked his opinion about what was the biggest threat facing the revived panther population at that point. He borrowed my pen and notebook and carefully sketched out a map showing the places where panthers lived.

Then, smack in the middle, he drew a circle.

That, he explained, was the location of a massive new town being proposed by 11 of the area’s largest landowners. An hour’s drive inland from the waterfront condos of Naples, amid cattle ranches and tomato fields and cypress swamps, they wanted to build thousands of new homes and businesses across 45,000 acres, and also open new sand and gravel mines.

That acreage, targeted for development over the next 50 years, would wipe out thousands of acres of primary habitat for panthers. Even worse, it would add at least 300,000 more car trips to the area that’s now largely devoid of them.

Being run over by vehicles is now the leading cause of death among panthers. Any panthers not chased away by sprawl would get turned into flat cats.

Ironically, the new town was being called “Big Cypress,” just like the nearby Big Cypress National Preserve, a swampy expanse that’s home to panthers galore. I could just picture tourists trying to head for the preserve to view its natural wonders and accidentally ending up in the sprawling development and being absolutely bewildered.

But then the plans changed, and then the whole idea was put on a shelf for a while, much to my relief. This month, though, the Naples Daily News and Fort Myers News-Press reported the whole “new town” project is back, with a new configuration but the same old location.

The big problem here is that although panthers have been classified as endangered since the first endangered list came out in 1967, the U.S. Fish and Wildlife Service has repeatedly failed to designate so much as a single acre of South Florida as critical panther habitat. That’s made it remarkably easy for developers to wipe out thousands of acres of it.

A recent story about the new town project by The Intercept drew a lot of attention because it reported that the landowners paid the U.S. Fish and Wildlife Service $292,000 to cover the cost of reviewing its plans to see if they would jeopardize the panthers’ future. Panther fans thought that seemed somewhat unseemly because it looked like they were buying a favorable ruling.

What I found more interesting, though, was that when the landowners drew up their plan for panthers, the taxpayers paid for it. The feds handed the landowners $765,357 of our money in grants to cover their cost.

You’d think for that much money, we taxpayers could tell them to leave the big cats alone and build somewhere that won’t tear up a panther habitat. Apparently, though, that wasn’t covered by the purchase contract.

Anyway, this particular threat to panthers that McBride warned me about now has lots of company.

Drilling for dollars amid a preserve

The biggest of the 11 landowners involved in the town of Big Cypress is a company formed by the descendants of Barron G. Collier, once the largest landowner in Florida and the namesake of Collier County.

You might think folks with such a historic name would be mindful of the importance of preserving remnants of old Florida. You would be wrong.

Wealthy old Barron Collier never saw a swamp he didn’t want to drain and cover up with homes and stores. His family is preserving that tradition, even though it’s not preserving much else.

In recent years, the company has developed a yacht club, a golf club, a tennis club, and, for all I know, they even built a model rocketry and underwater basket-weaving club – anything to sell thousands of high-end homes.

Another company owned by the Collier descendants is Collier Resources, which holds the mineral rights under Big Cypress National Preserve.

Over the past four years, Collier Resources has allowed a Texas company, Burnett Oil, to search for black gold beneath 110 square miles of the preserve. Burnett did that by driving around a massive, 33-ton machine that sends sound waves into the ground, leaving behind huge gouges that alter the flow of water.

Now Burnett is back, seeking permits to fill in wetlands in Big Cypress as part of construction for two well pads and access roads so it can drill for oil in the preserve. Burnett officials tried to make this sound like no big deal.

“We are committed to using the least impactful methods for extracting the private minerals underlying the preserve and compensating for any wetland and wildlife impacts,” Burnett spokeswoman Alia Faraj-Johnson told the Tampa Bay Times earlier this month.

I am not sure how you “compensate” for bringing in equipment that runs 24/7 and makes so much noise it will chase panthers away for good, but I look forward to seeing the plans.

That’s only the second threat. The third one, however, is where we find a tiny ray of hope.

The state gets to decide on sparing the state animal

I have written before about the three expensive new toll roads that former Senate President Bill Galvano foisted – er, excuse me, persuaded his fellow legislators to approve in 2019. He told them it would benefit rural communities, many of which have officially voted to say no thank you, we don’t want it.

And I’ve written about how the idea for building them came not from the Florida Department of Transportation but from the road-builders after they gave Galvano’s PAC a campaign contribution. Meanwhile, the three citizen task forces set up to study the trio of road projects all failed to find a need for them. They all but hung up a neon sign flashing “BOONDOGGLE!” in a variety of bright color schemes.

The southernmost of the three roads, which would revive plans for the never-built Heartland Parkway, would slice right through panther habitat, spurring more development there. It would also aid in funneling customers to the new town in Collier County and bringing work trucks down to the oil drilling operation in Big Cypress.

But here’s the good news: Galvano, a Bradenton lawyer, is no longer large and in charge. He’s been replaced as state Senate president by an egg farmer from the town of Trilby named Wilton Simpson. And he says when it comes to toll roads, don’t count your unhatched chickens.

At a recent Simpson press conference, South Florida Sun-Sentinel columnist Steve Bousquet asked Simpson about the toll roads, and the new boss sounded less sold on the idea than the old boss.

Simpson said he sees a need for the northern toll road, albeit in a scaled-back form that would be less expensive and less damaging to the state’s swamps, rivers, and forests.

“The environmental concerns that are out there are legitimate, in my opinion,” he said.

But that southern toll road through panther habitat? That’s still “under evaluation,” according to Simpson spokeswoman Katherine Betta. It might be too expensive and too destructive to pursue in a year with budget challenges the size of the Marianas Trench. We’ll see.

I wish I could leave you with that small glimmer of hope, a tiny possibility that common sense will prevail and the panthers will be spared at least that one threat. But I haven’t yet mentioned the scariest aspect of all this.

In previous years, the “new town” and the Big Cypress oil drilling needed permits from the U.S. Army Corps of Engineers to damage or destroy wetlands, with oversight by the U.S. Environmental Protection Agency. Not anymore, though.

Just before a certain Palm Beach resident reluctantly left the Oval Office, the Corps and EPA handed off their authority over federal wetlands permits to the Florida Department of Environmental Protection.

The DEP in recent years hasn’t been known for being all that protective of the environment. Under Rick Scott, for instance, it cut permitting time down to an average of just two days.

“There’s a lot of concern about this in the environmental community,” said Bonnie Molloy, a staff attorney for Earthjustice, which is already suing over how the handover was rushed through.

Until a court overturns the EPA and Corps decision, or the Biden Administration rescinds it, we’ll have a state agency that has the final say on all these things that would be bad for our state animal. I don’t find that at all comforting.

If I were a Florida panther, I’d leave off hunting deer and hogs for a bit to instead hunt up a good lawyer. Then I’d sue some of these humans for destroying my home when I didn’t do a darn thing to them.

If that doesn’t work, then maybe I’d at least make the state stop selling all those license plates that say “Protect the Panther.” That’s clearly false advertising.