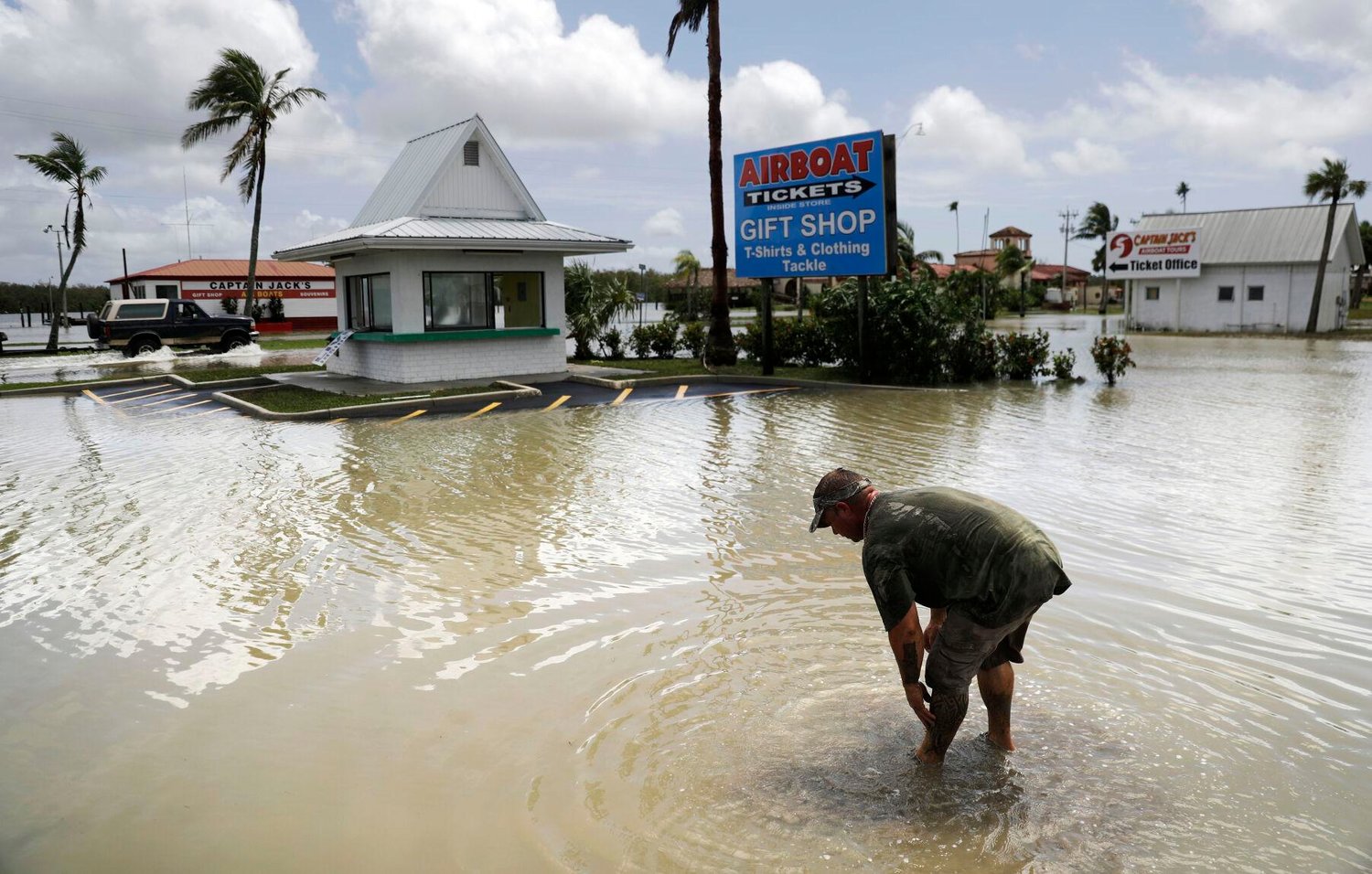 In this Sept. 11, 2017, file photo, Chris Stokes washes mud off his hands in the flooded parking lot of his father's convenience store as he cleans up the damage from Hurricane Irma in Everglades City, Fla. Coverage for hurricanes, essentially, insurance for losses from wind and rain, can be difficult to get and/or expensive if a business is located in a coastal area where storms are common. In Florida, for example, some insurers won’t sell policies. And flooding that frequently accompanies a hurricane is not included in a standard business policy. AP Photo/David Goldman, File
Posted Monday, February 22, 2021 10:57 pm

Now comes news that for many Florida property owners, their days of paying federally-subsidized bargain-basement rates for flood insurance may be soon over.

According to a 121-page analysis released Monday by First Street Foundation, a Brooklyn-based research nonprofit that assesses climate impacts on property values, more than 1 million of 1.7 million Florida properties covered under National Flood Insurance Program (NFIP) policies are significantly underpriced and could see rates triple beginning under a new system that goes into effect Oct. 1.

Flood damage is not covered under standard home insurance policies. The NFIP was created a half-century ago to offer federally subsidized policies to landowners in flood-prone areas with rates set by the Federal Emergency Management Agency (FEMA).

FEMA in April will release new NFIP guidelines and risk calculations under its Risk Rating 2.0 initiative that go into effect on Oct. 1.

First Street’s rate projections span more than 30 years. FEMA caps NFIP rate hikes at 18 percent for most homeowners, but the analysis suggests many Florida homeowners will face years of consecutive increases to bring them “in line with projected risk.”

“Any entity claiming they can provide insight or comparison to the Risk Rating 2.0 initiative, including premium amounts, is misinformed and setting public expectations not based in fact,” NFIB Executive Director David Maurstad said Monday. “While entities are free to suggest or estimate their opinion of what flood insurance premiums should be, they are offering exactly that — an opinion.”

More than one-third of 5 million NFIB policies nationwide cover Florida properties. According to a 2019 report by the Insurance Information Institute (III), 1,728 million Florida policies, including 118,000 for businesses, insured nearly $500 million in property liability.

Flood insurance is only mandatory in certain areas for mortgaged property. Although Floridians hold more than a third of NFIP policies, only about 65 percent of Florida homeowners required to buy flood insurance have such policies, according to a recent review of federally-backed mortgages.

According to First Street, more than 1 million Florida properties are among the 4.2 million “major flood risk” properties nationwide that would pay 4 1/2-times current NFIB rates to be “properly” insured.

First Street’s analysis found more than 400,000 Florida properties in designated flood zones should be paying as much as 380 percent more in premiums to cover actual risk and that as many as 400,000 other Florida homeowners should be included in flood zones.

About 20 percent of Florida NFIB policies are in Miami-Dade County where the average annual NFIP premium in the city of Miami is $1,069. Using First Street’s flood factor tool, the “proper” price is about $1,500.

At First Street’s projections, today’s $1,500 flood insurance policy will be $10,000 “in today’s dollars” in 30 years will have a dramatic impact on property values.

“When you have dramatic increases like that you have a drop in value because the cost of ownership goes up,” First Street Founder/ Executive Director Matthew Eby said. “Flood risk brings with it real and potentially devastating financial impacts that aren’t being priced into the market.”