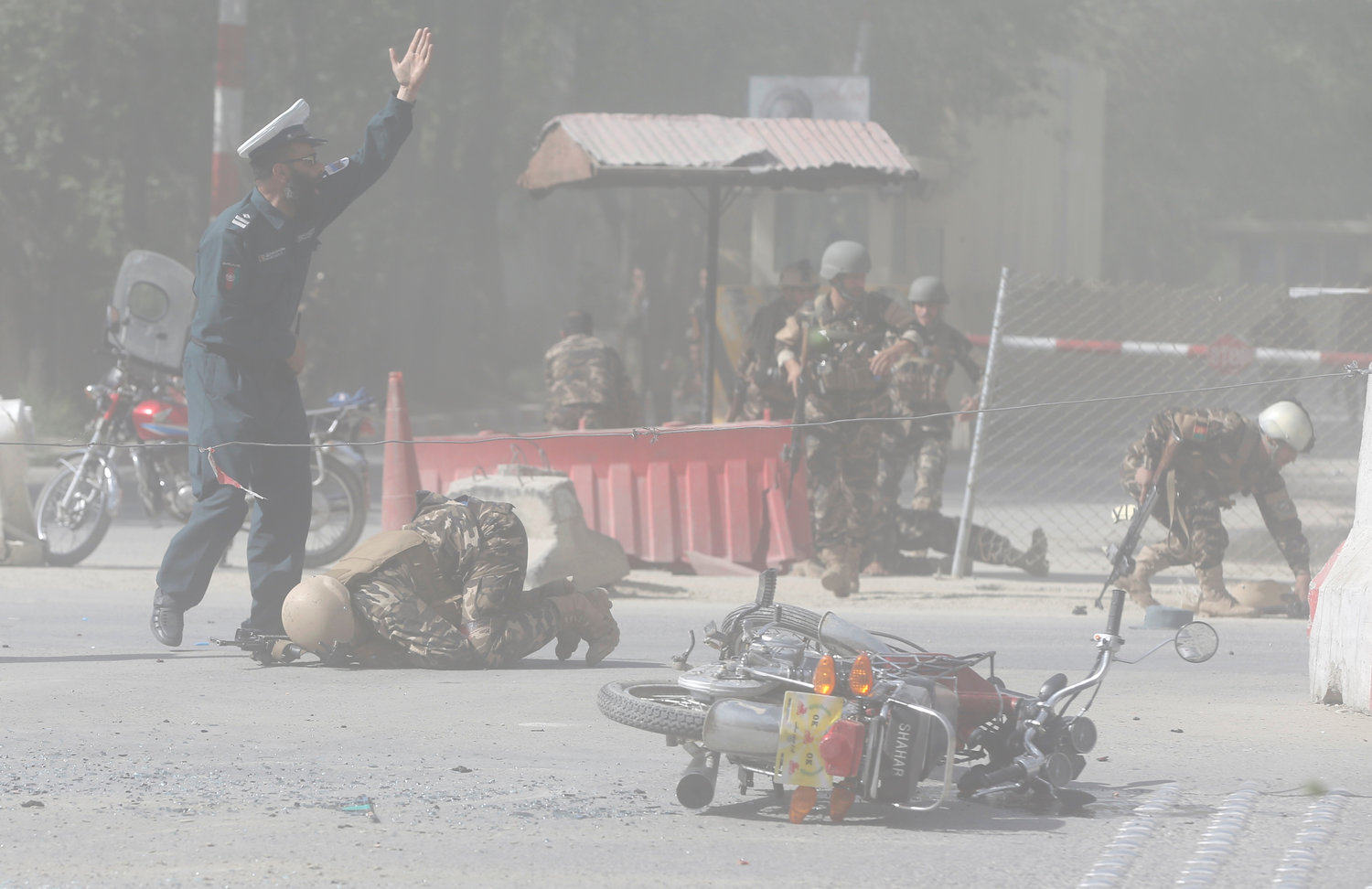 36 media workers killed in Afghanistan since 2016

An AFP photographer, a cameraman for the local Tolo TV station and several reporters for the Afghan branch of Radio Free Europe were among the fatalities, police said.

At least 45 people were wounded in the twin attacks, according to Kabul police spokesman, Hashmat Stanekzai, who also said four policemen were among those killed.

The attack was the latest in a relentless string of deadly large-scale bombings and assaults that have struck Kabul and elsewhere in Afghanistan so far this year. And even as the Afghan capital reeled from Monday’s assault, a suicide car bombing a few hours later in the southern province of Kandahar killed 11 children, a police spokesman said. Eight Romanian NATO soldiers were wounded in that bombing.

In a statement posted on an IS-affiliated website, the Islamic State group said two of its martyrdom seekers carried out the Kabul bombings, targeting the headquarters of the “renegade” Afghan intelligence services.

The blasts took place in the central Shash Darak area, home to NATO headquarters and a number of embassies and foreign offices — as well as the Afghan intelligence service.

Stanekzai, the police spokesman, said the first suicide bomber was on a motorbike while the second explosion meant to hit those scrambling to get to the scene to help the victims of the first blast.

The second attacker was on foot, in a crowd of reporters rushing to the site of the first attack, pretending to be one of the media, the spokesman said. The bomber then detonated his explosives while still among the reporters, Stanekzai said, intentionally targeting journalists.

Agence France-Presse said the news agency’s chief photographer in Kabul, Shah Marai, was among those killed. AFP said Marai died in a blast that struck journalists who had rushed to the scene of the earlier attack.

Media watchdog Reporters Without Borders said along with the nine journalists killed, six were wounded. However, Sediqullah Tawhidi, an official with the Afghan Journalist Safety Committee, sad only five journalists wounded. Conflicting casualty tolls are common in the immediate aftermath of big attacks.

The Paris-based group named the journalists, working for media organizations from multiple countries, adding that Monday’s attack was the deadliest targeting reporters since the fall of the Taliban in 2001. The group, also known by its French acronym RSF, said 36 media workers have been killed in Afghanistan in attacks by IS or the Taliban since 2016.

RSF urged the Afghan government to do more to protect journalists.

Jawed Ghulam Sakhi, a 28-year-old a taxi driver said “when the explosion happened, everywhere was covered with dust and fire, it was such a horrific scene” with bodies and body parts “thrown about on the street and the pavement.”

“I saw journalists covered with blood, this time they targeted the media,” Sakhi added.

Masouda, a young woman who was with her husband nearby, assailed the authorities. Her husband was wounded and was taken to the Wazir Akbar Khan hospital.

“I don’t know who is responsible for all these attacks, every day we lose our loved ones and no one in this government is taking responsibility for the killing of these innocent people,” she said.

Afghan President Ashraf Ghani condemned the attacks. The presidential palace released a statement saying that attacks targeting innocent civilians, worshippers inside the mosques, national and democratic processes, reporters and freedom of speech all are war crimes.

The U.S. Embassy also condemned the “savage bombings” in Kabul and reiterated its support for the Afghan people and Ghani’s government in their fight against terrorism.”

“We extend our deepest condolences to the families, friends, and colleagues of all the victims, including a number of brave journalists among the dead and injured,” it said, adding that “where media are in danger, all other human rights are under greater threat.”

Kabul chief of police Dawood Amin said the area hit was quickly sealed off and authorities were investigating. Mohammad Mousa Zahir, director of Wazir Akbarkhan Hospital, said several people suffering injuries from the blasts were being treated at his hospital.

In its claim of responsibility, the Afghan affiliate of IS, known as Khorasan Province, said the first martyrdom seeker detonated his explosive vest near the intelligence service in central Kabul, forcing officers to head to the area of the explosion. The statement said the second attacker detonated his explosives vest after that. The statement, which exaggerated the overall death toll as militant claims often do, did not say journalists were specifically targeted.

In the Kandahar attack, an Afghan official said a suicide bomber targeted a NATO convoy in the district of Daman but killed 11 children from a religious school nearby. The children had gathered around the NATO convoy for fun when the bomber struck, said Abdul Rahim Ayubi, a lawmaker from Kandahar.

Matiullah Helal, the deputy spokesman for the provincial police chief, said 16 people were also wounded in that attack, including NATO soldiers, civilians, and policemen.

Romania’ defense minister, Mihai Fifor, said eight Romanian troops with the “Carpathian Eagles” were among the wounded. NATO said the wounded service members, who are all in stable condition, were taken to Kandahar Airfield’s hospital for treatment.

Gen. John Nicholson, commander of NATO’s Resolute Support mission, said in a statement that “if the enemies of Afghanistan think their cowardly actions will deter the commitment of the brave Afghan forces and our Resolute Support advisers, or the call by the Afghan people for peace, they are sorely mistaken.”

Also, an Afghan police officer was killed and four people were wounded in an explosion in eastern Nangarhar province, said Attuhullah Khogynai, spokesman for the provincial governor. He said the slain officer was the chief of the criminal investigations unit for Behsud district.

No one claimed responsibility for the other attacks. The IS affiliate in Afghanistan first emerged in Nangarhar a few years ago, then expanded its footprint to elsewhere across the country.

IS and the more firmly established Taliban carry out regular attacks, with the Taliban usually targeting the Afghan government and security forces and IS targeting members of the country’s the Shiite minority, whom the affiliate perceives as apostates.

The relentless assaults underscore the struggles that Afghan security forces have faced to reign in the militant groups since the United States and NATO concluded their combat mission at the end of 2014. Both groups want to establish strict Islamic rule in Afghanistan.

Last week, an Islamic State suicide bomber attacked a voter registration center in Kabul, killing 60 people and wounding at least 130 others. There were 22 women and eight children among the fatalities.

And the month before, an IS suicide bomber targeted a Shiite shrine in Kabul where people had gathered celebrating the Persian new year. That attack killed 31 people and wounded 65 others.