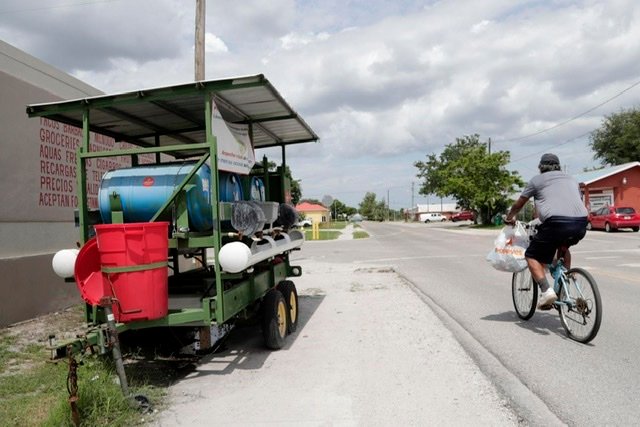 A man bicycles past a hand washing station set up outside of a popular supermarket Monday, June 8, 2020, in Immokalee, Fla., a farmworking town in rural Florida in the throes of a COVID-19 outbreak. Lynne Sladky
Posted Friday, June 12, 2020 10:59 pm

There were 1,902 new COVID-19 cases reported in Florida on Friday, a single-day record to cap a week in which 10,000 people in the state were diagnosed with COVID-19 and more than 270 died from the disease.

According to the Florida Department of Health’s (DOH) COVID-19 dashboard, as of Friday afternoon, 70,971 tests have been positive, 11,706 people have been hospitalized and 2,877 have died from the disease.

The sustained uptick, in which more than 1,000 new cases have been reported at least eight of the past nine days, began before Gov. Ron DeSantis launched phase two of his three-part reopening plan June 5, allowing bars, movie theaters, bowling alleys and theme parks to reopen at 50 percent capacity in 64 of the state’s 67 counties.

While it’s too soon to determine how phase two’s relaxed COVID-19 restrictions could affect the disease’s spread in Florida, the numbers since DeSantis launched phase one May 4 appear stark.

DeSantis again cautioned Friday that increasing new case counts is a function of the state’s dramatic increase in testing.

Nearly 1.337 million tests have been administered across the state, according to DOH, which reports an overall “positivity rate” of 5.3 percent.

“I do think you’re starting to see more people in the public that are interested in getting tested, so that is a good thing to be doing,” DeSantis said Friday at a news conference at the University of Miami.

DeSantis said new positive cases often are young adults without symptoms and unlikely to become seriously ill and Florida COVID-19 hospitalizations are down compared with May.

The governor said much of the state’s efforts remain focused on where COVID-19 does the most damage: assisted living facilities and nursing homes, prisons and, now, among migrant farm workers.

“I think the No. 1 outbreak we’ve seen is in the agriculture communities,” DeSantis said. “There was just a big case dump in north central Florida. You’ve had farm communities in Collier, Palm Beach, Martin, Levy, Hendry, and what happens is these are workers that are working close together once one gets it, it tends to spread very rapidly throughout those areas.”

Increased access to testing over the past few weeks, often orchestrated by advocacy groups and conducted by Doctors Without Boards, has disclosed severe outbreaks in migrant farmworker communities, such as Indiantown and Immokalee.

Indiantown, a Palm Beach County city with a large population of Guatemalan and Mexican immigrants, has reported 432 cases, which is more than Tallahassee has reported.

“The good thing is that these are low-risk groups, so almost none of them wind up hospitalized,” DeSantis said.

The governor said DOH is concerned farmworkers now in Florida will spread the disease as many migrate to work in northern fields.

“We’re talking with some of the other states to let them know,” DeSantis said. “We also have our Department of Health working with our agriculture, our growers to mitigate any of the spread.”