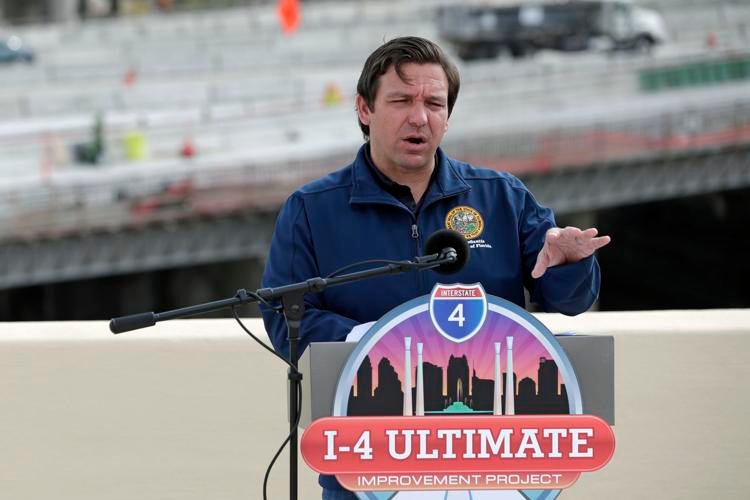 Florida Gov. Ron DeSantis speaks at a news conference Monday, May 18, 2020, in Orlando, Fla. The governor announced the I-4 and State Road 408 interchange has opened and because of less traffic due to the coronavirus pandemic, workers were able to expedite the workflow on the I-4 Ultimate Project. John Raoux / AP
Posted Monday, May 18, 2020 9:28 pm

Florida Gov. Ron DeSantis visited downtown Orlando on Monday to celebrate the accelerated opening of five new ramps for the Interstate 4 and State Road 408 interchange, a long-planned multibillion dollar project designed to remedy one of Florida’s most congested traffic quagmires.

The governor, however, couldn’t escape questions over another dogged bottleneck that continues to bedevil his administration and hundreds of thousands of newly jobless Floridians after the unemployment website collapsed in March, leaving many without first payments for weeks and some still waiting to receive them.

After harsh questioning last week in Tampa and Jacksonville from reporters who said they’re deluged by people demanding answers about where their payments are, DeSantis bristled when queried further Monday.

After News 13 Orlando reporter Greg Angel said he provided the Governor’s Office with 5,000 applicants whose unemployment claims have been rejected and asked why the Department of Economic Opportunity (DEO) dashboard shows more than 370,500 of 1.44 million “unique claims” processed as of Monday have been nixed, the governor shot back, “Did you vet any of them? Did you vet them?”

DeSantis said reporters should ascertain the validity of applicants’ Social Security numbers and other data before confronting him with unanswerable questions about individual claims.

He said “99.99 percent” of 896,921 applicants who have been paid met the state’s unemployment guidelines, noting more than $2 billion in payments have been made.

“DEO goes through this, and nine times out of 10, the application’s incomplete,” DeSantis said. “And I think if you have applied in that time period, and your application’s complete, and you qualify, I think 99.99 percent of those folks have been paid.”

The governor said some rejected applicants were from “other countries, other states” and most others either failed to provide required information or were being challenged by employers.

“We were in Tampa the other day, and one of the reporters said, ‘You know, I have someone here who has been unable to (get approved), filed them in mid-March,” he said. “So, it’s like, give us a name. We took the name, and it turns out the employer’s contesting it, saying the individual quit.”

DeSantis said it was reporters’ responsibility to dig into claims from people who are telling them they’re being mistreated by the state, adding most journalists are not investigating, “just asserting.”

“Is this deliberate obfuscation or is he really this OUT OF TOUCH?” Smith tweeted.

DeSantis Communications Director Helen Aguirre Ferré fired back at Smith in a tweet, “You and @newsguygreg appear to be working on the same political campaign but at least one of you should be accurate. FACT: @GovRonDeSantis said more than $2 billion benefits sent out to 896,921 individuals. We eagerly continue to help those who qualify but some do not.”

If reporters can’t verify the accuracy of claims, Florida’s Senate Democrats on Monday said they could, delivering to DeSantis’ office information about more than 1,000 applicants waiting for unemployment benefits since March.

“Rather than a smart sheet or a fax suggested by DEO in a tweet on Friday, our caucus took the people’s distress to the governor as he requested last week,” Gibson said.