Can an employee object to mandatory COVID-19 vaccines on religious grounds? 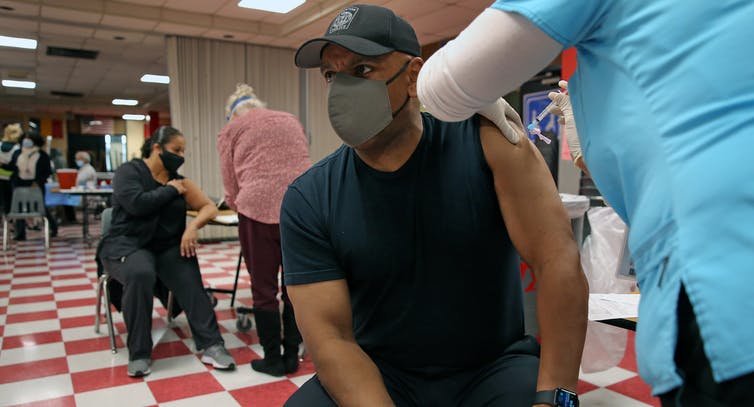 Many employers are hoping vaccines provide ‘a shot in the arm,’ but can staff opt out? David L. Ryan/The Boston Globe via Getty Images
Posted Saturday, February 13, 2021 9:22 pm

The rollout of vaccines across the U.S. has finally given hope to many employers of a return to some form of normality.

Although the program has gotten off to a faltering start, the promise that hundreds of millions of employees could soon be vaccinated could provide a lifeline to businesses that rely on face-to-face customer service, such as restaurants, and also allow the reopening of offices across the U.S.

But can a company mandate its staff to be vaccinated? And what happens if an employee refuses to take the shot, citing their religious beliefs?

These are not just hypothetical questions. A number of U.S. companies including airlines and restaurants have said they’ll require mandatory vaccines for their workforce. And as a law professor who has written about vaccination laws, I believe that in some circumstances, employers could find themselves on the hook for religious discrimination if their vaccination policies fail to offer a religious exemption.

What do the guidelines say?

It was the first time that the commission has provided an update on vaccines since the 2009 H1N1 influenza pandemic. Then, it advised employers that they should consider “encouraging employees to get the influenza vaccine rather than requiring them to take it.”

Under the new guidelines, employers are allowed to adopt mandatory COVID-19 vaccination policies. But the commission warned that any such policy would be subject to certain anti-discrimination laws.

In terms of religion, the commission points toward Title VII of the 1964 Civil Rights Act. This legislation requires employers to reasonably accommodate an employee’s sincerely held religious belief, practice or observance – but only if the accommodation can be made without “undue hardship” on the employer’s business.

The new guidelines echo earlier court rulings that take a broad definition of religion as including “moral or ethical beliefs as to what is right and wrong” that are held by the believer with the same sincerity as that of traditional religions.

As such, opposition to mandatory vaccines could be made from members of smaller faith communities as well as from adherents of more mainstream religions. For example some Christian Scientists and members of the Dutch Reformed Church are opposed to vaccination. There have also been legal challenges brought where employees state that their Christian beliefs require they avoid inoculation.

What is ‘undue hardship’?

Whether an objection on religious grounds is accepted will depend on whether it is deemed to not cause the business “undue hardship” – a phrase that has long been the subject of court interpretation.

On this, the new guidelines abide by the standard established in a 1977 landmark Supreme Court case, TWA v. Hardison.

In that decision, which focused on an employee’s request for time off for religious observance, the Supreme Court defined “undue hardship” as any cost greater than “de minimis,” or too small to merit consideration. In other words, in the case of COVID-19 vaccines, employers would not be required to incur even a minimal cost in accommodating an employee’s religious objection to receiving the COVID-19 vaccine.

But there remains ambiguity. The guidelines do not provide specific examples of what constitutes a “de minimis” cost. Previous court decisions make clear that “undue hardship” should be determined on a case-by-case basis.

In terms of COVID-19 vaccinations, workplaces such as bars, gyms and restaurants could conceivably claim “undue hardship” in accommodating religious exemptions to vaccinations on the grounds that doing so increases the spread of infection among their customers and employees. Similarly, health care facilities and hospitals could claim “undue hardship” due to the greater risk an unvaccinated workforce poses toward the vulnerable populations they serve.

In consumer-based businesses such as retail and restaurants, there could be an additional cost since the presence of unvaccinated workers could decrease the number of consumers or customers likely to frequent the businesses.

But at jobs in which employees work fully remotely and from home, employers might find it far harder to claim “undue hardship.” In such circumstances, employers are not likely to incur any cost in accommodating the religious employee’s objection, unless the employee themself becomes ill.

In providing its guidance, the Equal Employment Opportunity Commission stresses that it has authority to interpret only federal law. It warns employers to check if state and local laws provide additional protection for religious employees. For example, in New York, employers must accommodate an employee’s request for religious observance when it can be done without the employer incurring “significant difficulty or expense.”

The risk of litigation

The cost of potential litigation alone may be cause for employers to think twice about not providing religious exemptions from any mandatory vaccine requirement.

The lawsuits were generally unsuccessful. But some plaintiffs were able to successfully persuade hospitals to settle, with the EEOC settling cases for amounts ranging from approximately US$74,000 to $300,000.

While the current guidelines are more permissive of vaccination policies than the guidelines issued during the H1N1 pandemic, it is impossible to know the exact approach that the Equal Employment Opportunity Commission will take regarding religious exemptions.

But confronted with the worst public health crisis to hit the United States in a century, I believe the commission may be hesitant to bring litigation that broadly advocates for religious exemptions from vaccination.

There is a final wild card to note. In two recent cases brought to the Supreme Court, employees have asked the justices to overturn the court’s “too small to merit consideration” interpretation of “undue hardship” and instead define it as meaning a significant difficulty or expense.

The cases do not revolve around vaccinations, and the Supreme Court has not yet decided if it will hear either. But if it does and decides in favor of the employees, then employers will eventually face a higher burden when it comes to accommodating religious objections to mandatory COVID-19 vaccination.