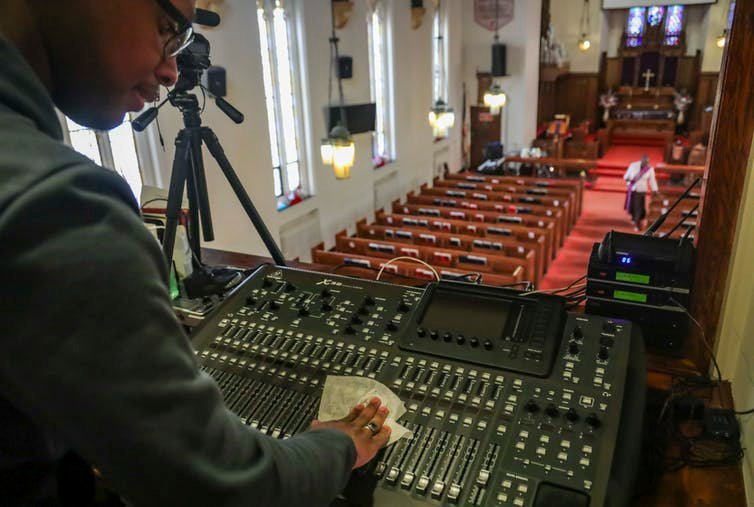 From online campaigns for justice to popular TikTok challenges, Black young adults are at the forefront of social media trends. But when it comes to the Black Church, the same cannot be said – it has lagged behind in the rush to go digital.

There is a reason for that. But as a scholar of online religious practices, I believe that ascribing the problem to a generational divide and declining church engagement among young people is overly simplistic.

Such a view, I argue, fails to understand the complex dynamic between Black young adults and the Black Church.

The pandemic is one case in point. Early in March, before state and federal guidelines were handed down, Black churches were split over whether to remain open or close their doors to congregants during the pandemic.

Some churches designed innovative practices to cater to congregants during the lockdown, like church service by phone, drive-in services or livestreaming worship before empty pews.

But others continued with in-person services despite stay-at-home orders. A survey in late April found that worshipers at historically Black churches were the least likely to say that their services had moved online.

The slow move to online technology by some Black churches has been attributed in part to an aging hierarchy.

Nonetheless, studies suggest that racial and economic disparities could also be factors in why many Black churches struggled to go online prior to and during the pandemic compared to non-Black churches. On average, Black Americans face greater barriers to internet access and high-speed connection at home than do white Americans. This disparity extends to Black young adults.

So-called Black millennials – those age 23 to 38 – total well over 11 million. They are the largest living population of African Americans.

Polling suggests a declining number are involved in the Black church. The number of young adults and Black Americans identifying as Christian fell by 16 percentage points and 11 percentage points, respectively, between 2009 and 2019.

Those who do identify as Christian – 65%, according to a 2014 Pew survey – participate in a diverse range of faith practices. In my forthcoming book on religion and Black young adults, I note the emergence of Black young adults who make a living through online faith-based practices.

These include D. Danyelle Thomas, founder of Unfit Christian, who fosters a popular Facebook community and provides intuitive tarot readings by email. There are others who provides Christian content through art and sermons to online subscribers, like Joseph Solomon, and YouTube personalities like Umar Johnson, who espouses Pan-Africanist thought as a response to religion.

The technological prowess of Black young adults as religious content creators is out there. But it can sometimes be overlooked in part due to longstanding perceptions of young people as lazy or feckless that dovetail with similar tropes about Black people that have been around since the 19th century.

It is also complicated by misconceptions over the behavior of so-called millennials, and how that term is applied to Black young people.

Back in 1991, researchers Neil Howe and William Strauss wrote the bestselling book “Generations,” coining the term “millennial” that went on to describe those born between 1981 and 1996. They followed it up with a more in-depth look at the generation in “Millennials Rising.” But the generalizations that Howe and Strauss make are based on a very small, mostly affluent white student population in Fairfax County, Virginia.

In more recent years, social scientists have been critical of their work for a variety of methodological reasons, including its limited sample size and racial bias.

This points to the ways in which systematic racism has influenced statistical studies of Black communities. Studies which homogenize identity around white young people obscure a discriminatory past in which views on youth and Black people combined to inform notions of young Black people as lazy and even criminal.

As I have found, this tendency can be most problematic when examining Black young people, their use of technology and the Black Church. It downplays the differences between young Black and white adults in how they engage online.

It also fails to properly account for the diverse modes of Black religious expression and the role of intergenerational relationships in Black communities.

Studies have shown that while Black millennials usually have smartphones, they are less likely to have access to laptops and desktops compared to white millennials.

This may explain the relatively high level of engagement that Black users have with social media platforms that work well on a smartphone format, such as Facebook, Instagram, Twitter and TikTok.

In recent years, white millennials have trended away from the social media site Facebook. But Black young adults remain invested in Facebook, allowing them to maintain an online connection with older family members who are more likely to be using Facebook than social media platforms aimed at younger users.

Social media sites like Facebook and YouTube also afford Black young adults the space to perform Black church rituals alongside older Black adults: for example, through the use of memes or TikTok challenges. Such digital forms of play in these examples, including donning ornate church dresses and hats and sharing hip hop remakes of gospel classics, provide experiences that connect African Americans of all ages.

Although some Black young Americans may feel a disconnect with the Black church over its positions on, for example, women’s rights, hip-hop, or LGBTQIA issues, they are still likely to be connected to traditional Black churches through family, friends and online religious content. In addition, young Black adults are significantly more likely to be living in multi-generational households, putting them in closer contact with older churchgoers.

As such, despite uneven access to technology, Black churches should be well situated for survival and growth in uncertain times. But it will require nurturing the intergenerational networks that already exist.