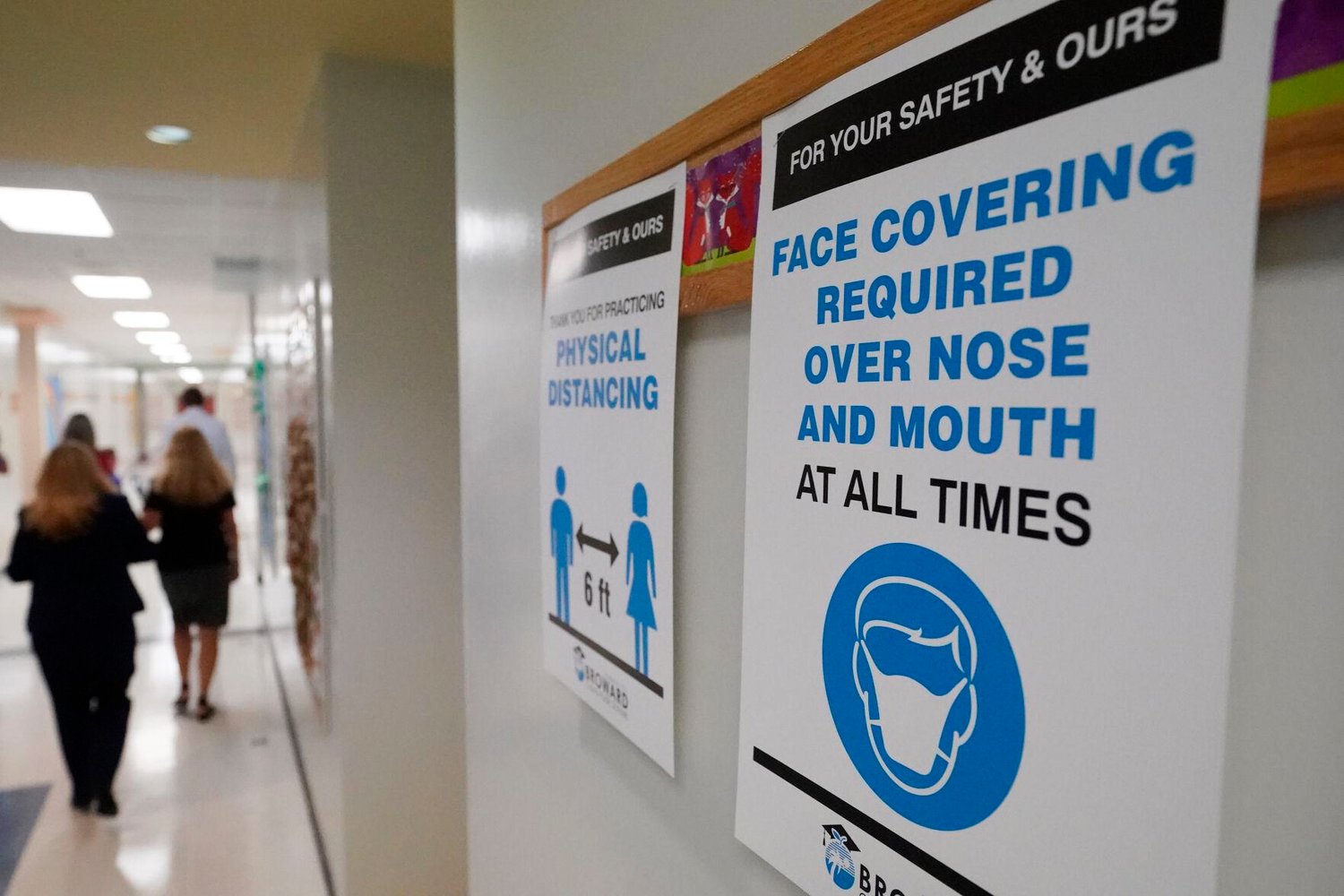 The governor, Thursday, let them know he’s watching and ready to pounce – especially on one district’s temporary mask order.

“It’s parents’ choice in Florida. And government can’t override the parents. And so we believe the parents are the ones that have the choice,” DeSantis said during a Tallahassee news conference. “And we obviously have an executive order to that effect.”

DeSantis’ executive order directs Education Commissioner Richard Corcoran to withhold funds from “noncompliant” school boards that impose mask requirements during the school year, which is starting next week in many Florida districts.

“The forced masking, it has harmed students,” DeSantis said before issuing the order last Friday. “The question is, shouldn’t this be something that the parent is at best to evaluate, the effect that this would have on their children?”

After the governor issued his order, Gadsden and Broward counties reversed plans to require students to wear masks. Shortly after, however, the Broward County School Board reinstalled the requirement.

“In light of the governor’s executive order, the district is awaiting further guidance before rendering a decision on the mask mandate for the upcoming school year. At this time, the district’s face covering policy, which requires the use of masks in district schools and facilities, remains in place,” the board said, noting it will “discuss next steps” next week.

The Alachua County School Board Tuesday required students wear masks the first two weeks of school, through Aug. 20. Students with a “documented medical condition that prevents them from wearing a mask” are exempt. The board will re-evaluate Aug. 17.

DeSantis press secretary Christina Pushaw later clarified DeSantis “has not signed onto any district’s plan” but is “100% no to Alachua. They blatantly defied the spirit of the executive order he signed.”

The Duval County School Board also agreed Tuesday to amend its student code of conduct to require mask-wearing but doesn’t require a medical reason to be exempted.

“Any student not wearing a mask pursuant to this policy must, through his/her/their parent or guardian, complete the opt-out procedures provided by his/her/their assigned school,” the policy states.

Leon County Superintendent Rocky Hanna has sent a letter to DeSantis asking his district be allowed to implement a “temporary” mask mandate for pre-kindergarten through eighth-grade students.

“One size doesn’t fit all 67 counties and 2.6 million students. Just as you stand up for the sovereignty of the state of Florida from federal mandates and executive orders, I too must advocate on behalf of my community and my school children,” Hanna wrote.

The Florida Board of Education (BOE) meets Friday to consider emergency rules for the upcoming school year.

But Sen. Gary Farmer, D-Lighthouse Point, in a three-page letter Thursday to Corcoran, said under Florida’s Administrative Procedure Act, the governor “does not have the statutory authority to instruct your department to engage in rule-making, nor does your department have the authority to do so on this particular issue.”

Farmer said DeSantis’ actions are ripe for legal challenges the state will lose.

“As no statute grants your department specific authority to engage in rule-making concerning mask behaviors in schools, any such action would be in violation of the law,” he writes, claiming ”it would be impossible for any department to provide the legally required justification for an emergency rule preventing mask mandates in schools.”