As monkeypox outbreak expands in Florida, elsewhere, health experts weigh in on how virus is transmitted 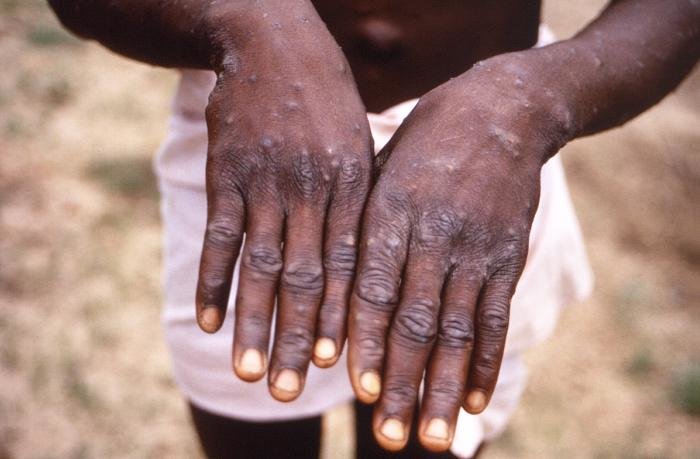 An image in 1997 was taken during an investigation into an outbreak of monkeypox, which took place in the Democratic Republic of the Congo (DRC). The virus has now expanded globally.
Photo by the CDC
Posted Wednesday, June 15, 2022 7:54 pm
By Issac Morgan, Florida Phoenix

While federal and state health officials monitor rising monkeypox cases, they have more to learn about how the virus is transmitted — could it be airborne? — and whether it’s connected to community spread.

The federal Centers for Disease Control and Prevention (CDC) and the World Health Organization (WHO) are tracking the 2022 outbreak of the rare monkeypox disease — usually found in several Central and West African countries but now expanding globally — that can cause a characteristic rash and other symptoms.

The CDC has reported 65 cases of monkeypox in 17 states, plus the District of Columbia; with the most cases in California (15), followed by New York (11), Illinois (8), and Florida and Hawaii (each with 5 cases) as of Tuesday evening.

Globally, there have been 1,879 confirmed cases in 35 countries, according to the CDC’s global 2022 map.

In Florida, the state health department is monitoring five cases confirmed in Broward County, in South Florida, as of Tuesday evening.

The monkeypox outbreak has triggered the CDC to raise the monkeypox travel alert to what’s called a “Level 2, Practice Enhanced Precautions,” which could mean cases will continue to rise across the nation.

Just last week, the CDC initially suggested that travelers wear a mask for protection against monkeypox but “removed the mask recommendation from the monkeypox Travel Health Notice because it caused confusion,” said CDC spokeswoman Kristen Nordlund.

“CDC will continue to update recommendations as more is learned about this current outbreak,” Nordlund said in an email to the Florida Phoenix.

The WHO wrote in a June 4 update on monkeypox that human-to-human transmission could occur through “respiratory droplets (and possibly short-range aerosols).”

An aerosol is defined as “a suspension of tiny particles or droplets in the air, such as dusts, mists, or fumes,” according to the CDC.

On a press call last week with reporters, CDC Director Rochelle Walensky said that the virus “is not thought to linger in the air and is not typically transmitted during short periods of shared airspace.”

“The virus is not thought to spread during interactions, such as having a casual conversation, passing in the grocery store, or touching the same item such as a doorknob,” Walensky said.

According to a New York Times report June 10, “health experts on airborne transmission did not disagree” with the CDC, “but some said the agency had not fully considered the possibility that respiratory droplets, large or small, could be inhaled at a shorter distance from a patient.”

When asked by a reporter about “how confident” the CDC is regarding the issue of the virus lingering in the air, Walensky said last week that airborne transmission of monkeypox has not been reported yet in the current outbreak.

“When we consider airborne transmission at the CDC, we are talking about small viral particles that become suspended in the air and can stay there for long periods of time. We have not seen documentation of that through our experience with this virus,” Walensky said.

That said, the Times reported June 10 that: “The World Health Organization and several experts have said that while ‘short-range’ airborne transmission of monkeypox appears to be uncommon, it is possible and warrants precautions. Britain also includes monkeypox on its list of ‘high-consequence infectious diseases’ that can spread through the air.”

The Times added: “Airborne transmission may not be the dominant route of transmission nor very efficient, but it could still occur,” said Linsey Marr, an expert on airborne viruses at Virginia Tech. “I think the W.H.O. has it right, and the C.D.C.’s message is misleading.”

Dr. Michael Teng, associate professor of medicine at the University of South Florida, also told the Phoenix via telephone that airborne transmission “is possible,” adding that “it’s likely not the way it’s spreading now.”

CDC officials have said that early data “suggest that gay, bisexual, and other men who have sex with men make up a high number of cases” in the 2022 outbreak, according to its website.

However, health officials have noted that anyone can contract monkeypox. “We do not yet know whether the virus may be spread through contact with semen or vaginal fluids,” Walensky said during last week’s media telebriefing.

Walensky addressed the typical ways monkeypox spreads during the call, saying that the virus “spreads through direct contact with bodily fluids or sores on the body of someone who has monkeypox.”

“Or with direct contact with materials that have touched these bodily fluids and sores, such as clothing or linen. It may also spread through respiratory secretions when people have close, sustained face to face contact,” she said.

Another issue is the root cause of individuals contracting monkeypox, with many U.S. cases connected to international travel, said Dr. Jennifer McQuiston, deputy director of the CDC’s Division of High Consequence Pathogens and Pathology.

During last week’s media call, she also warned of the possibility of community spread in the United States. On its website, the CDC also said that monkeypox patients should wear a surgical mask to prevent the spread of the disease.

“I think that the majority of cases in the United States, about 75 percent or more, are still reporting an international travel exposure that likely resulted in their monkeypox infection,” she said. “We also have some individuals who are reporting contact with a known monkeypox case, so identified through contact tracing and go on to develop infection.”

She continued: “And there are some individuals in the United States, it’s not many, just a few, who are not sure how they acquired monkeypox. And that might suggest that there is some community transmission happening at levels that are below what’s coming to the attention of public health officials.”

‘No deaths yet associated with this outbreak’

Florida’s first monkeypox case in Broward was related to international travel, according to the state health department.

Nina Levine, spokesperson with the Florida Department of Health in Broward County, said in an email Friday to the Phoenix:

“DOH-Broward met with all local acute care hospitals and emailed all physicians in Broward County to share information and guidance and will continue to provide updates as appropriate. DOH-Broward has provided and continues to provide important outreach information to our community partners for distribution.”

State Rep. Daryl Campbell, a Democrat representing part of Broward, said in an email to the Phoenix:

“While I am grateful at the fact that these individuals were able to recognize the symptoms and sought care, I am even more grateful to the medical team who were able to effectively diagnose and treat these individuals. My staff and I are aware of the recent increase in monkeypox cases and we are continuing to closely monitor the situation. Due to the fact that these are early cases that have been brought to our attention, we urge Broward County residents and all Floridians to follow the recommendations put forth by the CDC as we begin to identify the root causes of these transmissions.”

And state Sen. Shevrin Jones, a Democrat representing parts of Broward and Miami-Dade, told the Phoenix via text message: “We should be students from our experience with COVID and attack this issue early, so it’s not a crisis later. If we have all the information we need, let’s use that to keep our community safe and protected.”

While monkeypox cases continue to increase, Walensky of the CDC, said last week that: “I want to reemphasize that there have been no deaths yet associated with this outbreak.”

“All Americans should get educated about this disease including how to prevent it … and how to get tested.”

Tips for Employers to Help Overcome Addiction in the Workplace