Gainesville - Cobblestone streets, a clock tower, and students in their best business attire. You can hear the buzzing of children reading their cases over and over making sure everything is perfect, others practicing their pieces, some of the humor, drama, and even horror. You can feel the wave of anxiety hit like a tsunami as the clock ticks and with every passing moment, we come closer to the first round of the Blue Key Speech and Debate competition.

On October 27, Apopka High School went to Blue Key, a speech and debate competition that brings kids from all parts of Florida to compete for the 1st place Blue Key trophy. When the bus pulled up to Apopka High School, seven students stepped on with almost 35 other students from schools in Florida, all wanting to win. As we all took our seats on the bus headed towards the University of Florida, things became very exciting with the laughing at who knows what and that loud talking you do on buses because the engine is so loud. 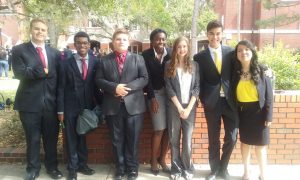 Arriving at the Hilton Hotel on the University of Florida’s campus, those same seven students stepped off the bus and looked in awe at the massive windows and almost Victorian-styled peaks. We walked through the doors into the hotel lobby and could smell a mixture of freshly waxed floors and some sort of spice. The hotel lobby had a sort of fall flair with its scarecrow that wasn’t at all scary and some pumpkins to match. The floors were a nice light cream colored tile that was so waxed you could almost see your reflection. To your left, they had four black leather chairs that were fit for royalty and a marble table that was shaded black and gray. To your right, you could see another type of sitting area with couches and other chairs in arrays of colors.

The rooms in the Hilton held the same awe as the lobby with its two queen-sized beds and light oak wood furniture. The bathroom had an interesting shower as it curved almost like the shape of a peanut. There was also a vanity with that superstar look and its extra makeup mirror.

We unpacked our bags into the double-sided closet, which came in handy with three girls with suitcases that could have been used on a one month trip, let alone a four-day trip. After the bags were unpacked and more comfortable clothes put on, we headed downstairs to play Cards Against Humanity, which was an interesting game that brought laughs and some dumbfounded stares from not understanding the jokes. After everyone was finished and curfew drew near, we went back upstairs to our rooms and got in bed ready for the festivities to come.

The first day of the competition consisted of coffee and that feeling you get in your chest when you are nervous and excited all at the same time. When we arrived at the University of Florida, our Apopka High School debate team separated and went to their events. Unfortunately, we didn’t see each other very much during the competition because it is a very large campus, so let’s just say it’s very easy to get lost and never see anyone you know.

The second day of the competition was a lot more nerve-wracking than the first because the more rounds you win the harder it becomes; with a certain number of losses you won’t win a trophy, and that, of all things, is the most nerve-wracking thing of all.

The third day and the last before semifinals and finals began with Dunkin Donuts and a lot more coffee throughout the day. Round after round you would see girls walking around barefoot or with slippers on with their heels in their hands and guys with suit jackets thrown effortlessly over their shoulders trying to stay cool in any kind of way. At the end of the day, a list was sent out to the debate coaches stating who made it to semifinals and one of the seven Blue Darters, Christopher Hamilton, made it to semifinals in congressional debate. 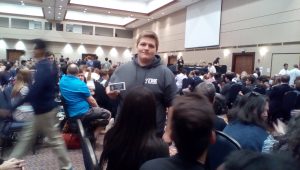 The last day of the competition mostly consisted of support for those who made it to semifinals in their event, and we also were lucky enough to get a tour of UF free of charge. The tour consisted of seeing the clock tower and the auditorium.

As the competition came to a close, we left victorious as one of the seven got a paper weight for semi-finals of congressional debate. We enjoyed some victory ice cream and headed back to the place it all began, the clock tower with the cobblestone streets. We got on the bus and headed back to Apopka, but the festivities didn’t end just because Blue Key did. On the bus, a debate about feminism was engaged and ended peacefully with both sides agreeing to disagree, but mostly the debate ended because we made it back to the school and everyone was really tired and that was our Blue Key trip.

Matida is a senior at Apopka High School, and a staff writer for the school newspaper Blue and White. She has many dreams and aspirations, one of them being to create a magazine and be known for inspiring the youth. In her staff bio, she goes by only her first name.