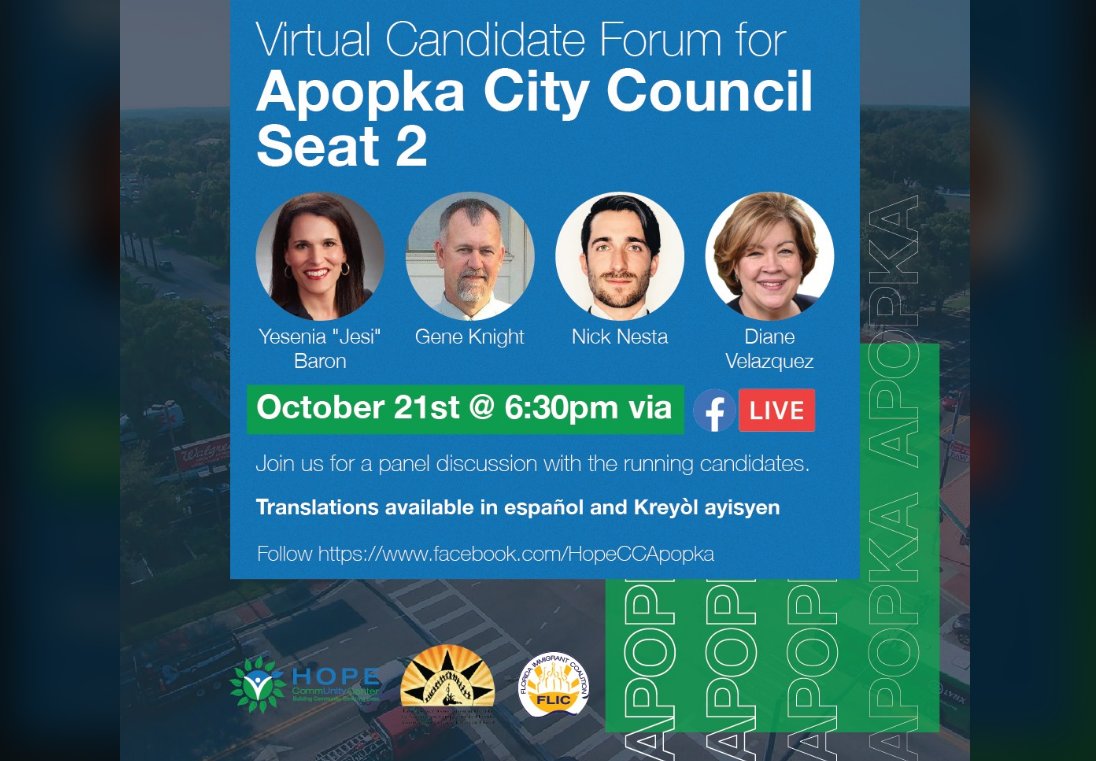 It's less than two weeks until Election Day, and the four candidates running for the Apopka City Commission Seat #2 are giving their closing messages to the voters. Typically in municipal elections, that would include knocking on doors, sending mailers, signage, attending meet-and-greets, standing on busy Apopka streets waving to drivers, and in-person debates.

But in this time of campaigning during COVID-19, some of that strategy has changed - in-person debates being one of them.

Many of the residents of the farmworking community live in the shadows. They keep their heads down. They don't make waves, interact with politicians, or go to City Council meetings. They are not seen as a large "super-voter" bloc and often get ignored by candidates and elected officials.

Despite doing a great deal of Apopka's labor, they often hold a small voice in the community.

On Wednesday night, The Hope CommUnity Center (HCC), Farmworkers Association of Florida, and Florida Immigrant Coalition hosted a Virtual Candidate Forum via Facebook Live in the place of its annual in-person forum. It featured three of the four candidates running for Apopka City Council Seat 2: Yesenia "Jesi" Baron, Nick Nesta, and Diane Velazquez. The fourth candidate, Gene Knight, did not participate in the event.

Eli Garcia, and Jacques Werleigh moderated the event. Garcia is a Community Organizer for HCC. Werleigh, formerly with the Orange County Environmental Protection Division, is a Co-Coordinator with the FA. Garcia and Werleigh asked the three candidates questions on a range of subjects, including low-income housing, gentrification, migrant rights, community engagement, racial and ethnic tensions, and COVID-19.

The migrant worker's plight was a focus of the forum, and the moderators wanted to know what these candidates would do to improve the relationship between government and the local migrant community.

Nesta has lived in Apopka since 1994. He started a real estate brokerage firm in 2013. He went to elementary, middle, and high school locally and graduated from UCF with a BA and MA in real estate. It's his first run for the city commission. He says his experience in the real estate industry has helped him understand the plight of the migrant.

Velazquez was the former Seat #2 commissioner from 2014-2018. She is a retired New York City Police Department detective, serving as a medical insurance fraud investigator. She drew on her experience as a commissioner to point out her concern for migrant workers while on the City Council.

"When I was Commissioner, I worked on this for four years," she said. "I started going to the Farmworkers and HOPE events. I was involved because it was important to me. They knew that I thought they were important. We need to help educate migrants and provide resources. I asked the Chief of Police 'how do we give them the power to be comfortable to report illegal wages?' He's asking civil and criminal to move forward. Migrants need avenues to pursue justice, and we need to continue to build relationships with them." 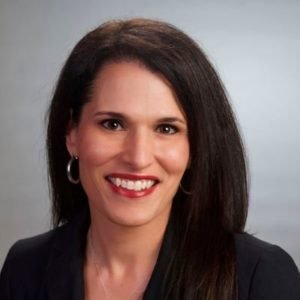 Baron moved to Apopka in 2012 and was born and raised in Miami. She graduated from Florida International University with a Bachelor of Science degree in criminal justice and then a Master of Science in organizational management from St. Thomas University. She started her professional career at the Department of Business and Professional Regulations as an investigative specialist. In 1997, she graduated from the police academy and rose to become a special agent with the Florida Department of Law Enforcement. Baron retired in 2012 and is now a Regional Liaison for the National Criminal Justice Training Center, AMBER Alert Training and Technical Assistance Program. She was also an appointed member of the Community Action Board for Orange County District 2. She believes dialogue is at the forefront of results.

"Communication is key," she said. "Hispanics and Creoles don't have representation. They need to be able to go to council meetings, events, forums, and be represented, and to have interpreters. We need interpreters at council meetings so they can be vocal and represented. It's the biggest gap right now that's not filled. When it comes to labor and health rights, we need to establish official relationships. Moving forward we need to prosecute illegal wages, so they get legal wages. Knowledge is key."

With racial and ethnic tensions high in the US, the moderators asked the candidates what they would do to protect black and brown residents, and Velazquez believes the Apopka Police Department is already showing a proactive, positive response to that issue.

"Here in the city, the APD has made a great effort in going to communities and having forums," she said. "To assure residents of issues they want to be addressed, the best way is to have community forums, for police to have forums in the communities, and to assure them of policies and procedures... and listen to communities. The only way to ease the perception of how they're viewed and treated is to go out into the communities."

"Most important is Communication," said Baron. "You have to have a conversation to understand one another. You need to be proactive instead of reactive and sit down with them and to understand. Most of the issues are fear and not understanding important cultural differences. You need to have someone to go to that is willing to say 'let me have this conversation with you.' We need to be open and trusting, willing to be proactive, and to listen."

As a city commissioner, Nesta thinks he can be a link to these underserved communities.

"If you've seen our materials, social media, there's a bridge on it," he said. "I understand there are tensions and gaps, and I want to be a bridge to those gaps. I understand. The first thing we need to do to bring races, generations, and different socioeconomic groups together to grow as a community. We need to create compassion to reduce tension. We need better education, and police policies need to be proactive in understanding who they are serving. Education is key to truly understand, ease tension, bring us together as a community, and make us stronger than we've ever been."

It is always a concern that candidates and elected officials seem interested in the farmworking/migrant community only during an election. With that in mind, the moderators asked the candidates what would they do to keep engaging and collaborating with their community?

Baron returned to a theme she had throughout the forum.

"Communication is key," she said. "I'm a facilitator. I have done this throughout my career as a Special Agent and Regional Liaison. I made sure we were building collaboration and an opportunity to create a forum where we can come together to have a discussion. I've got to make sure I'm representing our community in the best way and making sure I'm there and giving them a voice and opportunity. I want to stay true to my upbringing, make sure to remember what I did as a child for my family, and understand opportunities to build collaboration and opportunities to build community. Communication is key to understanding perspective and being proactive. We can solidify. To become one community, one Apopka - let's be committed to Apopka together."

Velazquez again made the point that she has been doing this in the community for quite a while.

"From way back I have been involved in the community. I went out of my way to engage them. I remember attending every event you had and celebrating your community. I was a community presence at Journey, Hope, FW. I brought the Mexican Consulate here. I would make sure they feel they are a part of Apopka, and they matter to me. I would be continuing that service. I remember how I met each one of you. Eli, I saw you from high school on up through the ranks. This community needs to know they're important and shouldn't be living in the shadows anymore - that their vote is just as important as everyone else's. Vote for me and welcome me back."

Nesta believes the best way to stay involved in this community is to be innovative and build towards a common goal.

"We should be creating community and understanding that we have different cultural and historical backgrounds," he said. "What makes Apopka unique and special is its past. It's a great and rich history, but we need to create a new history. COVID-19 has changed so much. We need to try new things to connect with communities. We have to do new things. I'm an innovative candidate, and we shouldn't just do what's been done in the past, but try new things. Events and forums are key. The past has led to tensions and issues. We need to build toward one goal - to appreciate each other."

This is the final scheduled forum for the Apopka City Commission candidates for Seat #2. Election Day is November 3rd.

To watch the full forum, you can go to the Hope CommUnity Center Facebook page.