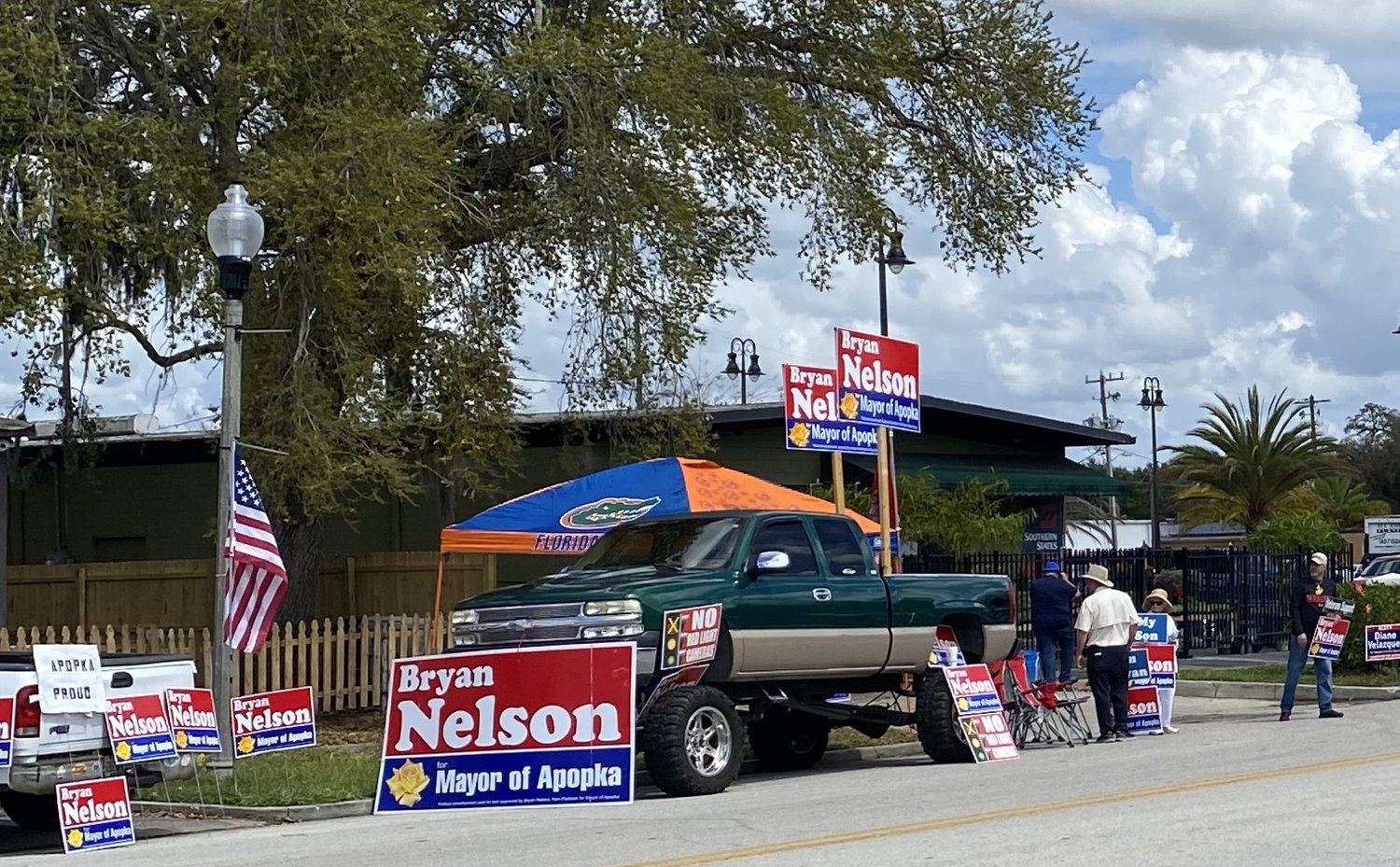 There are issues in this city that deserve to move forward and need to continue past the election. There are issues that need champions to keep them alive. Be respectful. Be vigilant. Be passionate. And stay engaged.”
By Reggie Connell, Managing Editor

It's been seven days since the 2022 Apopka Mayoral election concluded, but many will analyze its outcome for years to come. Mayor Bryan Nelson edged Commissioner Kyle Becker in the closest election in Apopka since former Commissioner Sam Ruth defeated former Commissioner Linda Laurendeau with 51.35% of the vote in the 2014 runoff for Seat #3 on the city commission.

By 7 pm on election night, many Apopka residents were on the Orange County Supervisor of Elections (SOE) website, refreshing their devices every few seconds in anticipation of the election's results. By 7:15 pm, the first batch of votes appeared:

A few minutes later, the SOE added the early voting tally, and the Nelson lead had been closed considerably:

The candidates were within an astounding two votes of one another, with a little over 3,000 vote-by-mail ballots remaining.

A brief history of voting-by-mail

In the 2020 Presidential election, only 30% of Republican voters voted by mail, while 59% of Democrat voters used the vote-by-mail process. Before the election, President Donald Trump went as far as to say this about voting by mail:

"Universal mail-in voting is going to be catastrophic," he said. "It's going to make our country the laughing stock of the world."

At about 7:35, the SOE had sent the final results. Nelson received 1,798 mailed votes to Becker's 1,276, giving him a slim margin of victory and four more years as Mayor of Apopka.

So what led to Nelson's victory? Can it be broken down and understood?

The 2022 Apopka Mayoral election fits that description. There were factors known, speculated on, and unknown. But now, with all the details available, here are the elements I think led to Nelson's victory.

Election Day began with an overcast sky and moderate participation at the Apopka precincts. Rain was in the forecast. There were a little over 100 voters per hour, and expectations of record turnout were evaporating.

By early afternoon, the clouds were gone, humidity replaced mild temperatures, and the voters ticked up a bit per hour. It looked as though turnout could match the 2018 model.

By late afternoon people were getting off work, and turnout surged, surpassing the 2018 mayoral record of 6,451 voters and eventually landing on 6,762. It broke the record of total voters in a mayoral election but lagged under 20% of the 35,000 registered Apopka voters.

It was not the turnout model a challenger wants.

After 3,022 vote-by-mail ballots received and 1,625 early voters, only 2,055 election day ballots were cast, which generally favors an incumbent.

So what kept voters away?

Nelson filled Apopka mailboxes with campaign ads that depicted Becker in a black and white photo and said, among other things, 'his fiscal irresponsibility is costing you higher taxes, higher wastewater rates, more debt, and sweetheart developer deals.' On the back of the mailer, it went on to say, 'Kyle Becker leaves the taxpayers holding the bag for his bad financial decisions.' Nelson followed those mailers with similar ads in The Apopka Chief.

Apopka residents also received a mailer late in the election cycle from a Tallahassee organization called"The Committee to protect Florida" that attacked Becker with rhetoric akin to Nelson's.

Was it effective? It's difficult to say.

Typically, a campaign would feature their accomplishments in the last month rather than attempting to define an opponent. It's an unusual tactic for an incumbent. Still, it could explain the low turnout percentage of the election when it seemed that the excitement level was high.

Nelson consistently outraised Becker throughout the election cycle and outspent him in the closing months. Incumbents who enjoy a significant fundraising lead are usually successful in getting reelected.

The simple truth is, it's hard to beat an incumbent with a fundraising advantage.

First, let me dispel any rumors about the SOE. I read quite a few on social media.

Yes, it's unusual that the vote-by-mail ballots are totaled last. But keep in mind... the SOE was conducting multiple elections around Orange County. But according to the SOE's office, there were 86 vote-by-mail ballots received at 5:30 pm by the USPS, and 10 ballots were dropped off at the office after 6pm. Because of the late arrivals, the SOE posted election day and early voting totals first.

In January, Nelson mailed a letter with an application to request a vote-by-mail ballot to Republicans in Apopka. It was controversial at the time because it had a self-addressed, stamped envelope with Nelson's address on it rather than the SOE's office.

But in a close election, it may have made a difference... if only to give Republicans the green light to vote-by-mail in 2022.

In conclusion: A win is a win

Nelson took a fundamental approach to win a close election. He utilized his fundraising advantages to mail Apopka residents both negative and positive ads and held on to win a narrow victory.

It's hard to see the outcome as a mandate by the Apopka voters, and it's equally difficult to point to any specific issues as the reason for Nelson's reelection.

However, a win is a win.

Congratulations to you, Mayor Nelson. You fought hard and remain undefeated in municipal, county, and state elections.

And thank you, Commissioner Becker, for six years of service to Apopka. You ran an impressive campaign, and you gave your all to the City Council.

A time for Apopka to come together?

I know it's traditional to call for Apopka to unify, come together as a community, and move forward. That's what we do after an election. I have even attended events designed to start the healing process.

I'm just not sure that's the healthiest direction for Apopka to take right now.

There are issues in this city that deserve to move forward and need to continue past the election. There are issues that need champions to keep them alive. There are causes that may not be as important to the City Council as they are to you.

My call to Apopka is this:

Be respectful. Be vigilant. Be passionate.  And stay engaged.

Yes, elections do have consequences. But do not let the outcome of an election change what's important to you.