A new tropical storm could impact Florida by the weekend 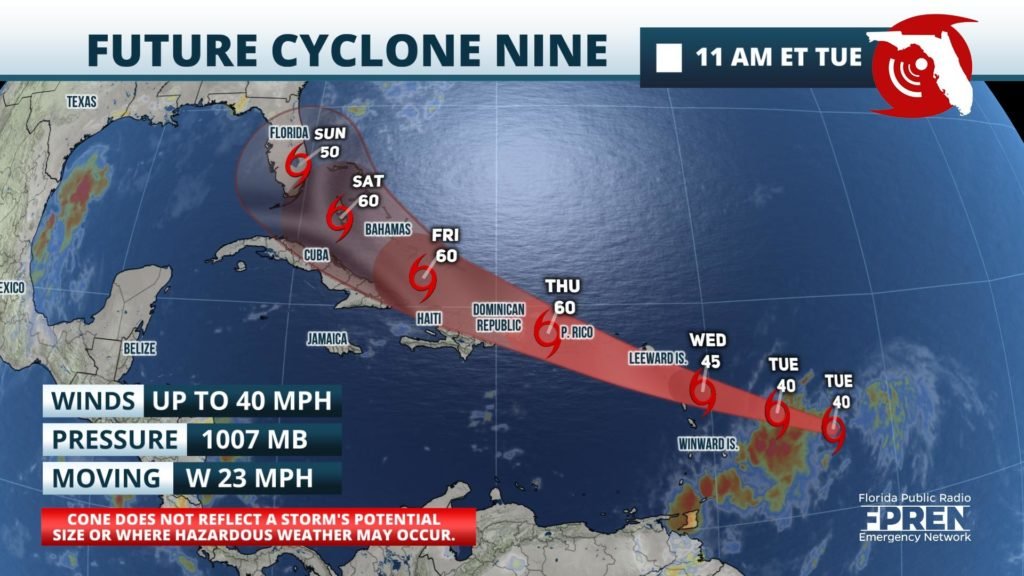 Potential Tropical Cyclone Nine formed Tuesday morning about 500 miles east of the Windward Islands. Uncertainty in the fate of the developing storm is high, but parts of the Sunshine State could be affected by the end of the week.

Potential Tropical Cyclone Nine predicted likely to strengthen further Tuesday and become a Tropical Storm Tuesday night as it tracks west-northwest toward northern parts of the Lesser Antilles. Tropical Storm Warning have been issued for the northern Lesser Antilles and Puerto Rico as of Tuesday morning. Heavy rainfall and potentially life-threatening flash flooding and mudslides is anticipated across the northern island chain and parts of the eastern Greater Antilles beginning Wednesday.

UPDATE: At 1100 PM AST Tuesday night, the disturbance was centered near latitude 14.6 North, longitude 59.4 West. The system is moving toward the westnorthwest near 25 mph (41 km/h), and this general motion with some slight reduction in forward speed is expected over the next few days. On the forecast track, the system will move through the Leeward Islands on Wednesday, near or over the Virgin Islands and Puerto Rico Wednesday night, and near or over Hispaniola on Thursday.

Maximum sustained winds are near 40 mph (65 km/h) with higher gusts. Some strengthening is expected during the next 48 hours, and the system is forecast to become a tropical storm on Wednesday.

Tropicalstormforce winds extend outward up to 230 miles (370 km) from the center.

The long-range track and intensity forecast for this system remain uncertain at this time given the unorganized structure of the potential cyclone. The majority of weather models agree that this system will likely approach the Windward Islands and take a northerly turn over the eastern Greater Antilles. If the system comes into contact with these larger islands it could help to keep the storm below hurricane strength as it approaches the Sunshine State by Saturday night and overnight into Sunday. There is still the possibility that Potential Tropical Cyclone Nine will remain out at sea and turn before impacting the continental United States, or even dissipate before approaching Florida.

The latest advisory from the National Hurricane Center is expecting this system to maintain tropical storm strength over the next several days as it approaches South Florida. An Air Force Reserve Hurricane Hunter Aircraft was scheduled to investigate the system Tuesday afternoon providing more information on the strength of the Potential Tropical Cyclone Nine. When wind data was collected it indicated that the disturbance has not become any better organized since the previous advisory.

This system will be given the name "Isaias" once it is deemed a tropical storm by the National Hurricane Center (maximum wind speeds of 39 mph or 62.8 km/h). This would be the earliest ninth named storm on record in the North Atlantic basin. The current record for the earliest "I" named storm was "Irene" on August 7, 2005.