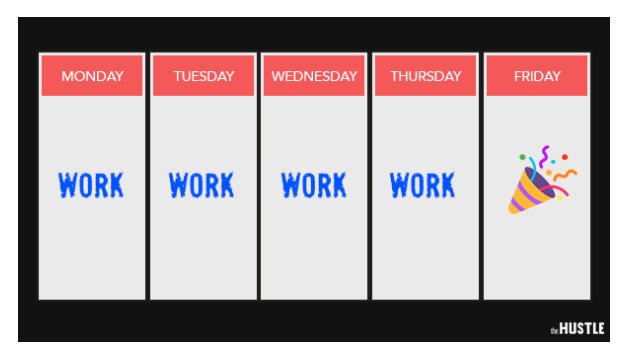 - 84% said they were more productive

- 86% said they were more efficient with their time

- 84% saw improvement in their work-life balance

In 1908, a New England cotton mill instituted a 5-day workweek.

The move inspired others to follow suit over the next 30 years until the Fair Labor Standards Act made 2-day weekends official in 1938.

Now, over a century later, some tech companies are shaving another day off the workweek, per Inc.

… just made its 4-day workweek permanent after a 3-month trial. In a companywide survey following the trial, Bolt employees noted several benefits to the new schedule:

While many have been quick to praise the move as a generous perk for Bolt employees, CEO Ryan Breslow says the move is selfish — citing improved productivity across the board.

He’s also quick to mention that not all companies are suited for the shift. Bolt makes a point to measure worker impact, which will help sniff out any decreases in productivity over time.

Iceland’s national government trialed a 4-day workweek between 2015-2019, and found worker productivity either remained the same or improved.

Even in Japan — where workaholism is so common there’s a word for overworking oneself to death, “kiroshi” — companies like Panasonic are letting employees opt in to the 4-day schedule.

As for which day?

Bolt went with Fridays, with most employees working Monday to Thursday to ensure no one feels like they’re missing anything on their day off.

The Wanderlust Group, a startup that builds software for outdoor activities like boating and camping, also follows a 4-day workweek, but decided to give employees Mondays off.

Sounds like a pretty effective cure for a case of the Mondays.

Read more: The Hustle’s Mark Dent went deep on “Time vs. Task,” and the most effective way to measure work.