From the Orange County Corrections Department

Now in its fifth year, the Orange County Corrections Department Armed Forces Dormitory, which opened in November 2012, continues to exceed expectations as a blueprint for other correctional organizations seeking to establish similar programs. Making the dorm so unique is not just that it is for incarcerated military Veterans, but that those Veterans are supervised by correctional personnel who are also military Veterans or reservists.

The unit serves as a place where incarcerated Veterans can find solace among other members of the military and receive re-entry services designed to meet their specific needs. On the walls, one will find hand-painted military insignias, left behind by a former resident who painted them to represent the various branches of service both the inmates and staff represent. In comparison, the dorm is similar to many others at the Orange County Jail, but there is a different sense of order and pride on the floor. Here conversations among inmates, officers, as well as program managers often bridge across a common language of jargon and shared experiences from their past military lives.

The dorm, originally orchestrated by Orange County Correctional Captain Malik Muhammad, who is also a military Veteran, provides counseling, treatment and re-entry support while allowing Veterans to repay their debt to society. While the dorm offers a variety of supportive services, their Veteran status does not overlook the circumstances which led to their incarceration, nor excuse any behavior that may have caused hardship or pain to another.

Captain Muhammad explains that the effects from exposure to combat and military zones, coupled with substance abuse and mental illness is sometimes too much for many Veterans and likely why they are at a greater risk to be incarcerated than the general population.

According to the Bureau of Justice Statistics, an estimated 181,500 U.S. Veterans were incarcerated in prison and jails across the country in 2011- 12. Although the number is slightly lower in 2017, Veterans still make up approximately eight percent of all inmates in county and state correctional facilities. 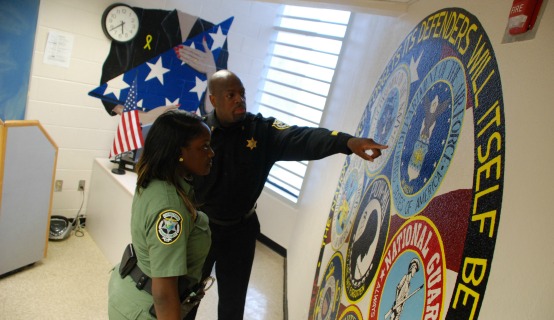 Each incarcerated Veteran housed in the Armed Forces Dormitory is screened to meet specific criteria. Individuals facing violent or more serious charges are not candidates for the program.

“We hope that through our efforts, we [correctional staff] are able to give them a glimpse of the individual they once were, and remind them that despite a temporary setback, they can again be that person who was so widely respected and contribute to their country, community and family,” said Captain Muhammad.