By Bradford Vivian and first published in theconversation.com

As a nation, the U.S. is debating the meaning of Confederate symbolism and history.

That debate is closely tied to how the U.S. commemorates or fails to commemorate, the full spectrum of African-American history.

In my research, I explore why people choose to remember some parts of the past and not others. I have also studied how communities choose to forget portions of the past in order to overcome longstanding conflicts.

Based on this work, I would argue that nostalgic versions of Confederate history inhibit our ability to memorialize African-American historical experiences and achievements as centerpieces of U.S. history.

Forgetting and forging ahead

A commitment to starting over and creating a new future is a deep-seated part of the U.S. experience. Thomas Paine published “Common Sense” in January 1776, as American colonists debated whether to declare independence from Great Britain. He proclaimed that a “new era of politics” and “a new method of thinking” had begun.

“Common Sense” urged colonists to forget monarchical history and culture so that they could embrace a radically new historical narrative. The doctrine of American exceptionalism that Paine helped to create – the belief that the U.S. is not only different but exceptional – depends upon an ideal of renewal. It suggests that Americans are joined together in the constant creation of a new history and a new politics.

Paine’s rhetoric argues that forgetting old customs and conflicts does not necessarily mean destroying the past. In fact, the verb “forget” descends from an Old Germanic construction that suggests losing one’s hold on something. Basic English definitions of the term – “to treat with inattention or disregard” or “disregard intentionally” – describe a voluntary decision to no longer grasp something, not destroy it.

People today don’t literally remember the Civil War. Neither can they literally forget it. The terms “remember” and “forget” are metaphorical descriptions of different attitudes toward history.

As I’ve shown in my research, sometimes communities decide that previously beloved narratives of the past have become divisive and deserve to be set aside. People often attempt to resolve conflicts rooted in history by adopting an attitude of forgetting. For example, Athenians in the fourth century B.C. restored democracy after a civil war with an act of political forgiveness. Warring parties brokered peace by swearing “not to recall wrong.” More recently, former Soviet states have removed monuments of communist leaders since the fall of the Soviet Union.

Asking Confederate advocates to forget in the name of a greater good does not mean asking them to erase the past. It means inviting them to the work of truth and reconciliation and foregoing the Lost Cause – a historical mythology that insists the Confederate cause was noble and heroic. Confederate memorials symbolize a form of white supremacy that sought to violently erase the heritage of kidnapped and enslaved Africans and their descendants. They honor efforts to destroy the history of millions while celebrating a wildly distorted version of the Confederate past.

Forgetting that distorted vision of history would not erase an authentic past. It might create opportunities for understanding post-Civil War history in more honest and equitable ways. 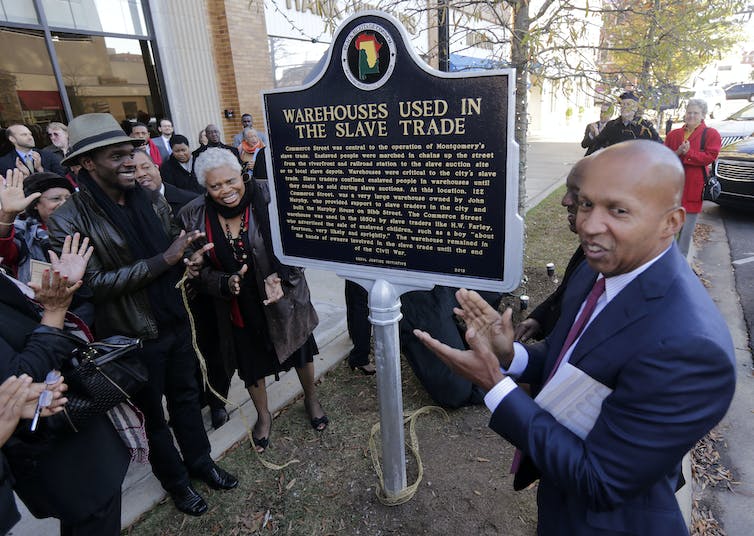 The unveiling of a slave trade historical marker in Montgomery, Alabama, in 2013. AP Photo/Dave Martin

Confederate nostalgia works against the American ethic of renewal and the desperately needed work of truth and reconciliation. Such work, as in post-apartheid South Africa, includes collective agreements to remember the past differently, resolve historical conflicts, and imagine a new future. Even Stonewall Jackson’s grandsons support proposals to remove a statue of their grandfather in Richmond, Virginia, for this purpose. They advocate for a “larger project of actively mending the racial disparities that hundreds of years of white supremacy have wrought.”

Communities can pursue this objective not only by removing monuments. They can also remove barriers to understanding history in more honest and equitable ways.

Select figures from the aftermath of the Civil War can help us to imagine what letting go or forgetting the past would look like. For example, in his second inaugural address, President Abraham Lincoln implored Union and Confederate states to reconcile, “with malice toward none, with charity for all.” In December 1866, Robert E. Lee himself expressed a similar sentiment. He argued that erecting Confederate memorials “would have the effect of retarding instead of accelerating” post-war recovery.

Ironically, the prevalence of Confederate remembrance today suggests that many Americans have forgotten Lincoln’s and Lee’s pleas to consciously forget past disputes.

As a result, it impedes efforts to memorialize the full scope of African-American resilience in the face of persistent brutalities. Robert E. Lee, Jefferson Davis and Stonewall Jackson are household historical names, with their likenesses preserved in numerous monuments. Not so for black Americans like Benjamin Banneker, David Walker, Sojourner Truth, Ida B. Wells, Booker T. Washington and countless others.

Myriad streets and public buildings are named after Confederate leaders. While no comprehensive catalog exists, some databases estimate Confederacy markers number in at least the thousands.

Of course, efforts to commemorate African-American history also exist. They include the recently opened National Museum of African American History and Culture in Washington, D.C., the National Memorial for Peace and Justice in Montgomery, Alabama, and plans to replace Andrew Jackson with Harriet Tubman on the U.S. $20 bill. But those efforts are historically delayed and dramatically overshadowed.

These disparities indicate how reverence for the mythic Confederate past hinders the nation from seeking a new kind of future. Pursuing the difficult work of truth and reconciliation is impossible without letting go of the Lost Cause.

That work would involve sober discussions about how Confederate monuments, and the attitudes toward history that they illustrate, represent distortions of American history rather than praiseworthy representations of it. It would also require finding new ways to prioritize the teaching and commemoration of African-American history.

Local governments have removed statues of Confederate generals in the dark of night. Will we also labor together, in the light of day, to discover more honest and equitable ways of understanding our history anew?

Bradford Vivian (PhD, Pennsylvania State University) is an associate professor and director of undergraduate studies in the Department of Communication Arts and Sciences. His research and teaching focus on theories of rhetoric (or the art of persuasion) and public controversies over collective memories of past events.