With the housing market stabilizing from the drama of the early years of home price recovery and the subsequent slowdown during 2019’s home shopping season, we have a rare moment of calm to reflect on what housing might look like in the year to come.

If current trends hold, then slower means healthier and smaller means more affordable. Yes, we expect a slower market than we’ve become accustomed to in the last few years. But don’t mistake this for a buyer-friendly environment – consumers will continue to absorb available inventory and the market will remain competitive in much of the country.

But while the national story is a confident one, housing in some manufacturing-heavy markets may see adversity. The struggle could be even more stark, since similarly affordable housing markets with a more balanced job profile may be 2020’s rising stars.

Here are our bold predictions for the trends and styles that will dominate the housing market in the first year of the next decade.

The United States will NOT enter a recession in 2020

As recently as this summer, half of a panel of economic experts surveyed by Zillow said they expected a recession to come in 2020 – with another third saying they expected the economy to shrink in 2021. Ongoing trade volatility, the potential for some kind of geopolitical crisis to flare up and/or a stock market retreat from record highs were all cited as the most likely potential triggers for the next downturn…

…but it became clear as the year progressed just how resilient the U.S. economy has been to these and other economic headwinds:

It’s important to be clear-eyed: The threat to the economy from trade volatility is real, and the manufacturing sector of the economy in particular has been hit hard lately after steadily building orders throughout much of 2018. And the stock market itself, while still testing new highs, is very sensitive to ongoing trade discussions – a reflection of overall investor faith and business leaders’ confidence in their ability to make effective, long-term, strategic decisions. And the potential for a minor conflict in any corner of the globe to become bigger at any time cannot and should not be ignored.

But taken all together, current conditions point to a recipe for continued economic growth, not a recession. Growth itself may be slower than the strong pace we’ve seen at times throughout the recovery, but growth will still occur for at least the next year.

After six years of uninterrupted growth through the early years of the recovery, the square footage of newly built, single-family homes began to shrink in 2016. We expect this downsizing trend to continue in 2020, driven by a confluence of economic and demographic trends. 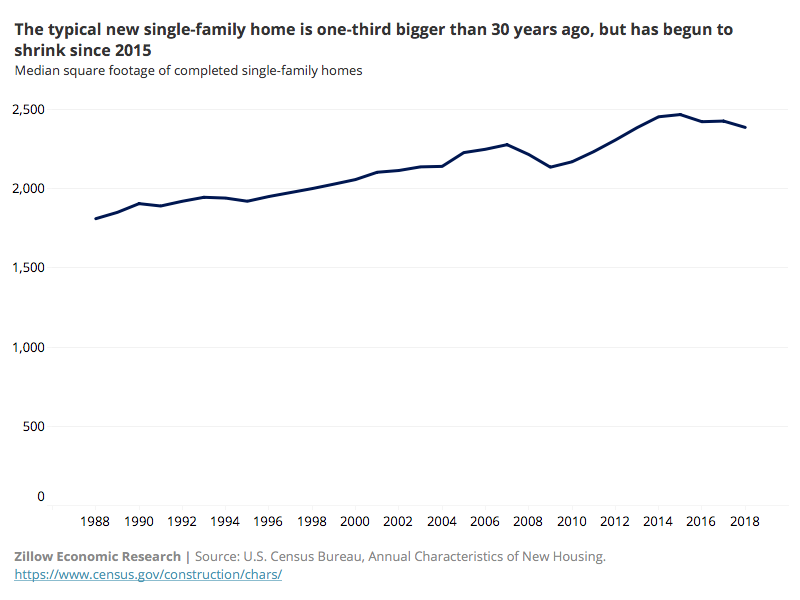 There are several 50,000-foot reasons why we expect this gentle downsizing to continue:

There will always be demand for large, suburban homes on big lots – but on net, we expect attitudes to shift away from that and toward a lifestyle with a smaller footprint.

Home Value And Rent Growth Will Be Slower, More Stable and More Sustainable

Since hitting a recent high of 8.3% in December, annual growth in the median U.S. home value has been slower than the month prior in every month so far in 2019 – currently standing at 4.7% in October (the latest month for which data is available as of this writing). At the same time, annual rent growth – while largely stable – has crept up modestly in each month since June.

In 2020, we expect both rent and home value growth to slow somewhat further, stabilizing at a sustainable pace in line with wage growth and inflation and to a level indicative of greater balance between buyers and sellers, tenants and landlords.

The median U.S. home value is expected to end 2020 up 2.8 percent from the end of 2019, according to the Q4 2019 Zillow Home Price Expectations Survey, a quarterly survey of more than 100 economists and experts sponsored by Zillow and conducted by Pulsenomics. That’s down from the average prediction of 3.6% annual growth expected from the same panel by the end of 2019 compared to the end of 2018. Since 1996, the average annual pace of growth in the Zillow Home Value Index is 3.8%, so a slowdown from current levels would still represent a return to long-term norms.

On the rental side, annual rent appreciation has been on the rise since June and currently sits at about 2.3%. We expect this recent uptick in rental growth to continue through the start of 2020 before petering out sometime around the start of Spring. By the end of next year, we expect annual rent growth to fall below two percent, or about a half a percentage point lower than where they currently stand.

By keeping monthly mortgage payments within reach even as home prices rise, continued low mortgage interest rates will help ensure that rent growth doesn’t again reach the highs experienced just a few years ago. Low rates will encourage more renters to pursue homeownership, further boosting overall homeownership rates that have been on the rise since 2016. 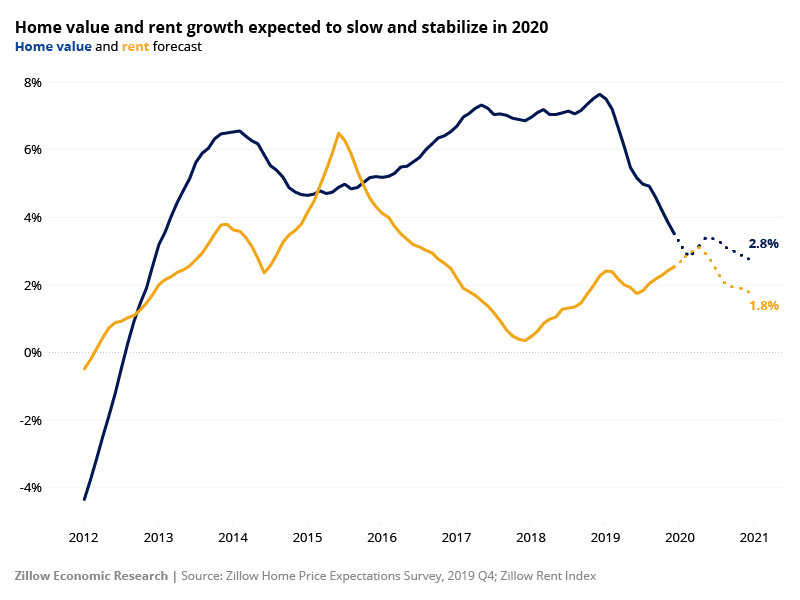 Mortgage rates fell markedly in 2019, and are expected to remain near their current, relatively low levels for the bulk of 2020. Softening GDP growth and investment, continued global weakness due in part to the U.S.-China trade conflict, and below-target inflation will continue to hold rates in check. Barring marked improvements in these indicators, the Fed will have no reason to return to rate hikes.

If low mortgage rates persist, this will keep home purchase demand strong and continue to fuel decent price growth in the nation’s most broadly affordable markets. But low rates won’t be enough to reignite high growth rates in the nation’s highest-priced markets, notably on the West Coast and in the Northeast. In these markets, buyers seem to have hit an affordability ceiling where even low rates can’t bring many homes into the typical first-time buyer’s budget range, especially because low rates don’t help overcome the upfront hurdle of high down payment requirements. In those high-priced markets, buyers will continue to fan out in search of more affordable areas.

Color Will Make a Comeback

Goodbye, Hygge (look it up). Hello, color! The fun will return to home design in the form of bold prints, lively wallpaper, and brightly hued walls. After a decade of Scandinavian modern design that dominated retail and social media feeds as Americans embraced neutrals, minimalism and clutter-free living, expect a shift toward playful, creative design. Look for the color to be injected in unexpected ways in kitchen cabinetry and appliances, in lighting fixtures and on interior doors and moldings.

After bottoming out in January 2010 during the depths of the housing crash, overall annual U.S. existing home sales didn’t consistently top 5 million until late 2014. By late 2016, a growing number of first-time homebuyers drove the annualized rate of national home sales to bounce around 5.5 million for over a year.

But by spring 2018, things started to turn down again: The seasonalized annual sales rate dropped back to 5 million by December 2018, and the impact of rising mortgage rates and the increasing difficulty in saving for an adequate down payment were the talk of the town. As sales pulled back, available inventory started to swell and what had been aggressive home value appreciation began to slow.

But 2019 brought another swing. Home value growth continued to soften, but mortgage rates came back down, what inventory that had accumulated was quickly scooped up and home sales rebounded.

Looking ahead at 2020, we think home sales will continue to climb, but slowly. Why?

Everything coming to Amazon Prime Video in February