Alarming report comes on the heels of “100 deadliest days”

New teen drivers ages 16-17 years old are three times as likely as adults to be involved in a deadly crash, according to new research from the AAA Foundation for Traffic Safety. This alarming finding comes as the “100 Deadliest Days” begin, the period between Memorial Day and Labor Day when the average number of deadly teen driver crashes climbs 15 percent compared to the rest of the year. Over the past five years, more than 1,600 people were killed in crashes involving inexperienced teen drivers during this deadly period.

“Teen crashes spike during the summer months because teens are out of school and on the road,” said Amy Stracke, Managing Director of Traffic Safety Advocacy for AAA – The Auto Club Group. “The Foundation’s research found that inexperience paired with greater exposure on the road create a deadly combination for teen drivers.” 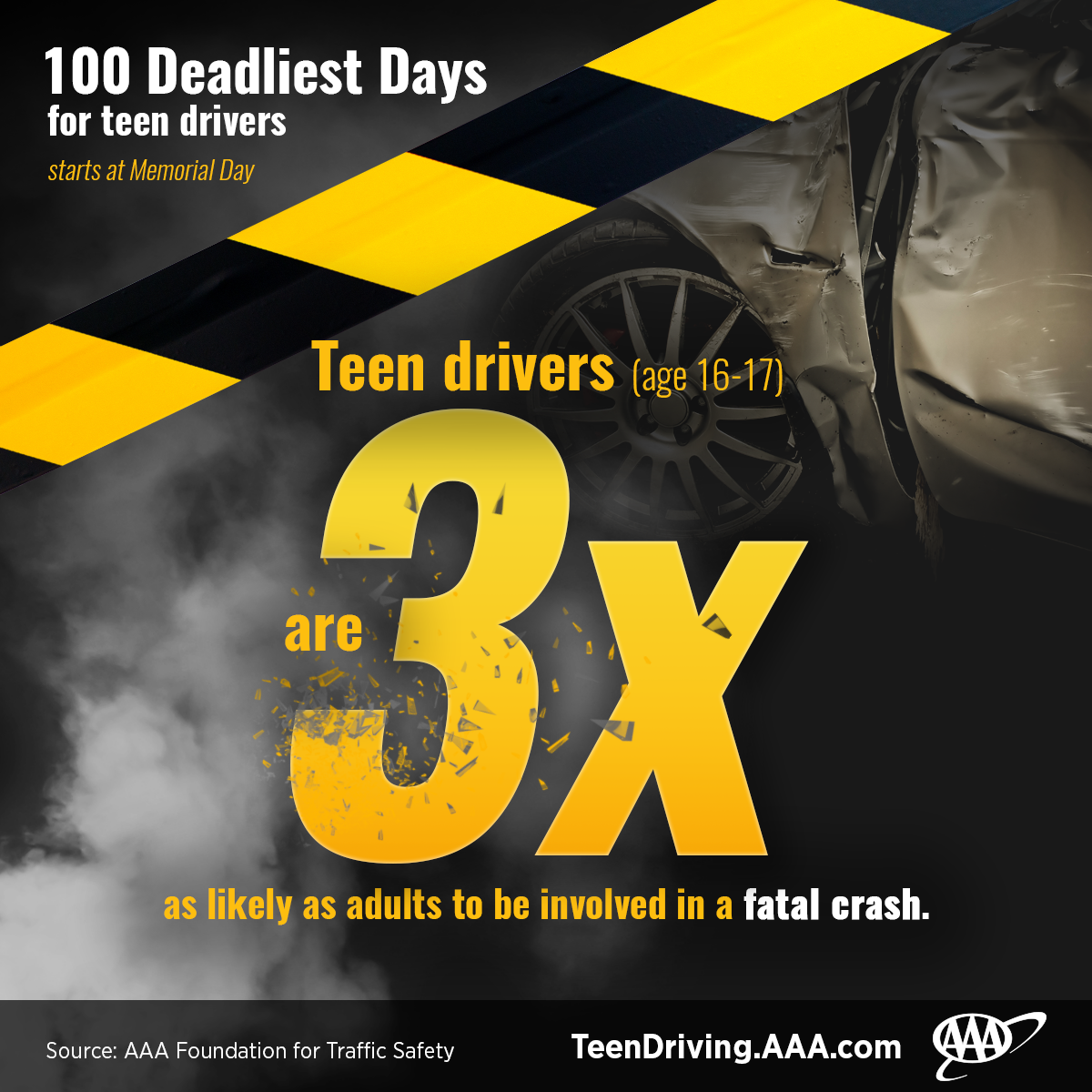 The AAA Foundation for Traffic Safety’s latest study, Rates of Motor Vehicle Crashes, Injuries, and Deaths in Relation to Driver Age, analyzes crash rates per mile driven for all drivers and found that for every mile on the road, drivers ages 16-17 years old are:

Fatal teen crashes are on the rise. The number of teen drivers involved in fatal crashes increased more than 10 percent from the previous year, according to the National Highway Traffic Safety Administration’s (NHTSA) 2015 crash data, the latest data available. To reverse this alarming trend, AAA urges parents to help reduce the number of deadly crashes on the road by getting more involved and talking to their teens about the dangers of risky behavior behind the wheel.

“Parents are the front line of defense in keeping our roads safer this summer,” said Matt Nasworthy, Traffic Safety Consultant for AAA – The Auto Club Group. “It all starts with educating teens about safety on the road and modeling good driving behaviors like staying off the phone and always buckling up.”

Three factors that commonly result in deadly crashes for teen drivers are:

To keep roads safer this summer, AAA encourages parents to:

TeenDriving.AAA.com has a variety of tools to help prepare parents and teens for the dangerous summer driving season. The online AAA StartSmart program also offers great resources for parents on how to become effective in-car coaches as well as advice on how to manage their teen’s overall driving privileges. Teens preparing for the responsibility of driving should enroll in a driver education program that teaches how to avoid driver distraction and other safety skills. AAA also offers membership discounts for new teen drivers to help keep them safe on the road in case of an emergency.

Farm Share this weekend with Senator Bracy, food for 500 families in Apopka