The Colonial Pipeline is still down, yet Florida remains well supplied with fuel. While there is not considered to be a gasoline “shortage” in Florida, there are reports of fuel outages at various gas stations, due to unusually strong demand.

“It’s likely that motorists are seeing reports about supply issues in other states – due to the pipeline – and are racing out to top off their tanks,” said Mark Jenkins, spokesman, AAA – The Auto Club Group.  “The problem is, that surge in demand is what actually creates the supply issue, since gas stations can only hold so much fuel at a given time.”

Florida is not heavily reliant on the Colonial Pipeline. Ninety percent of Florida’s gasoline flows in through our ports on cargo ships. That gasoline is then driven to the pumps on tanker trucks.

“This is not a refinery issue. Gasoline is still being made and fuel continues sailing through Florida ports, regardless of whether Colonial Pipeline is operational,” Jenkins continued. “Florida is said to have access to plenty of gasoline. It’s now just a matter of getting the fuel where it’s needed, primarily those gas stations that are being tapped out due to panic buying.” 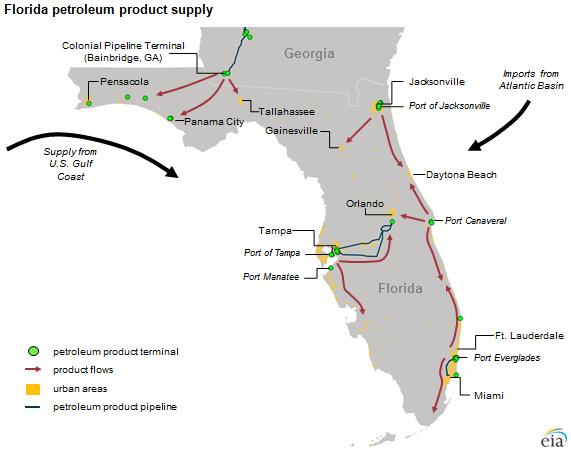 Gasoline sales in the southeastern US are reportedly 2-3 times higher than normal. Overnight, Florida enacted a State of Emergency to help satisfy strong demand. The State of Emergency enables fuel trucks to carry more gasoline (between 500 and 1,000 gallons more) and spend more time on the roads making deliveries. Additionally, the EPA has granted a waiver that strengthens Florida’s fuel access, by allowing the sale of both winter and summer blend gasoline. What this means is more gasoline being delivered to a neighborhood near you.

“AAA urges drivers to be calm and not make matters worse by hoarding,” Jenkins said. “Please continue with normal fueling patterns and take only what you need.”

Florida gas prices have not made any significant gains since the Colonial Pipeline outage was reported on Friday. The state average is $2.89 per gallon. That’s 2 cents more than this time last week, yet 3 cents less than this year’s highest price of $2.91 per gallon, which was recorded in late March. Visit GasPrices.AAA.com to view daily gas price averages.

Colonial Pipeline is expected to announce restart plans on Wednesday. The company previously pledged to restore operations by the end of the week.

Click here to read more from the EIA about the Colonial Pipeline outage and how it relates to Florida.